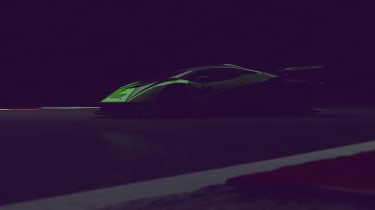 Lamborghini has teased and revealed two new track-only machines at the World Finals of its Super Trofeo series held at Jerez in southern Spain. We’ve seen one of them before, the Urus ST-X, which was presented as a concept last year, but it’s the teased new hypercar that is being developed by Lamborghini’s Squadra Corse racing division that’s bound to whet more appetites than the racing version of Lambo’s 4x4.

As befits any teaser these days details are scant at this stage but the as yet unnamed hypercar will be a track-only affair that’s due to make its official debut in 2020. What we do know is that it will feature the naturally aspirated 6.5-litre V12 from the Aventador SVJ, but as it’s no longer required to meet road going emissions and noise standards it’s had a bit of a power hike, now developing 819bhp, a gain of 59bhp. That should ensure its performance figures offer an upgrade on the SVJ’s 2.8sec 0-62mph time and its 217mph top speed.

While the overall shape looks quintessentially Lamborghini there are a number of carbon fibre details including an airscoop on the roof, a large rear wing and a ‘bonnet’ with two air intakes. The carbon theme is continued with the car’s monocoque to which is attached an aluminium front frame and a steel rollcage that also incorporates the engine. The gearbox is a six-speed sequential Xtrac which also acts as a load-bearing structure to which the rear suspension is attached.

Further details include a set of Brembo brakes while the wheels are wrapped in Pirelli tyres. As befits its track remit the differential has a mechanical self-locking set up which allows the driver to adjust its preload to suit prevailing track conditions. The Squadra Corse hypercar is due to be revealed in full in 2020 and will be built in limited numbers with no plans for a road-going version or a race series. 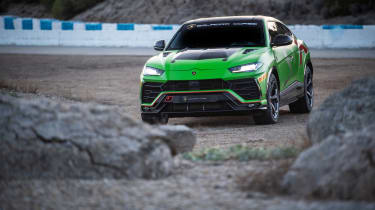 However, Lamborghini is planning to race its Urus ST-X, a machine it revealed in concept form last year, claiming it to be the first ‘Super SUV’ in the world of racing. It sticks with the road-going model’s twin-turbo V8, but as this stage it hasn’t revealed whether this will have a higher output than the production model. When it was revealed last year Lamborghini was talking of a 25 per cent reduction in weight but at the moment it’s now claimed to have a ‘lighter structure’ thanks to a carbon bonnet, carbon rear wing and racing exhausts along with a partially stripped out interior and racing seats.

The Urus ST-X will make its racing debut at the 2020 Super Trofeo World Final in Misano where the four class winners will have the opportunity to race against ‘motorsport celebrities’ on a specially constructed track. 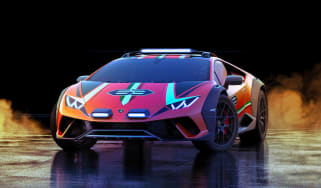