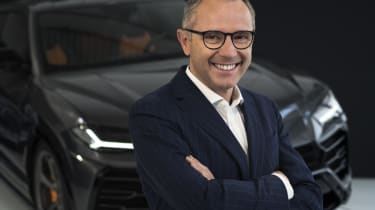 Stefano Domenicali, the former boss of Ferrari’s Formula 1 team has left his role as CEO of Lamborghini to replace Chase Carey as CEO for Formula 1. Lamborghini has yet to appoint a new CEO.

Domenicali joined Lamborghini in 2018, replacing Stefan Winkleman who moved within the VW Group to head up Bugatti.

The departure of Domenicali comes at time of speculation that the VW Group’s executive board is working on a plan to off load a number of its premium brands, with Bugatti potentially being sold to electric car specialist Rimac, which Porsche owns a 15 percent stake. The proposed Bugatti sale could see Porsche increase its stake in Rimac further.

Bugatti and Lamborghini both have a sizeable negative effect on the group’s fleet CO2 rating, which is crucial considering much of the brand’s high-profit model lines are still big, CO2-heavy models from Audi and Porsche. Therefore it’s possible that if Bugatti was removed from the VW family that Lamborghini would soon follow. By selling both brands VW will gain more breathing room in avoiding the EU CO2-based penalties that have already come into force.

Changing buyer perception is another driver of this possible shake up. Post-dieselgate Volkswagen Group having brands that exclusively build CO2 heavy super and hypercars is at odd with the clean image the brand is investing heavily to change its public perception.