This stunning, and bespoke, Miura SVR has been restored by Lambo’s in-house Polo Storico division 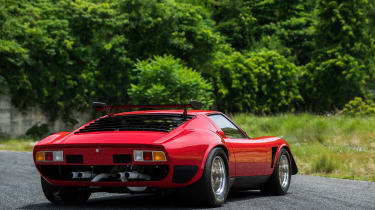 Lamborghini has restored the stunning Miura SVR, a bespoke model built in the mid-’70s, for a Japanese owner, inspired by the Miura Jota. Restored by Polo Storico, Lamborghini’s in-house restoration service, the car was revealed at a special event at Japan’s Nakayama circuit, in celebration of its Japanese origins.

Built originally as a racing model for legendary test driver Bob Wallace, the race car was initially lost to an accident, but was rebuilt from an existing Miura S model in full SVR trim in the ’70s by Heinz Straber, who returned the model to Italy for its transformation. The model was built in conjunction with other Miura SV Jota models, but this sole SVR example remained the only one, which was sold to a Japanese owner.

> Click here for our latest review of the Lamborghini Aventador S

Sat on chassis number #3781, the model has been restored in Italy over the course of 19 months, longer, in fact, than it took the original to be built in the first place. Painstakingly put back together from pieces in the factory, the team at Polo Storico had many challenges to overcome, including various design quirks that were specific to the SVR.

Its new owner specified near-complete originality, although for safety reasons modern seats, four-point safety harnesses and a detachable roll-cage have been fitted.

The Miura SVR cemented its legendary status in Japan from both a scale model that was built from it by Japanese scale model manufacturer Kyosho, and its inclusion in a Japanese manga called Circuit Wolf. In fact, thanks to the rarefied status of the SVR, scale models were in fact used by Lamborghini Polo Storico as reference for the final paint finish of the actual car.