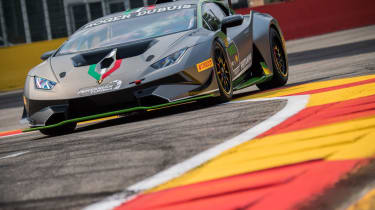 To commemorate 10 years of its Super Trofeo single-make race series, Lamborghini has created a special edition of its current customer race car, the Huracán Super Trofeo Evo. Called the 10th Edition, this limited production race car sports a special livery, a numbered plaque, a matching race suit and, to celebrate a decade of racing, only 10 will be made.

The Super Trofeo Evo 10th Edition is painted in matt grey with lime green accents. The same green is then used for a pattern that decorates the panels around each wheel, the design is made from Y-shaped forms that resemble the Huracán’s rear lights,. The exterior is then finished with a stripe made up of the three colours of the Italian flag, that runs the length of the car.

Although unveiled at this year’s parade for the 24 hours of Spa-Francorchamps, the Lamborghini Huracán Super Trofeo Evo 10th Edition won’t make its race debut until next year as 2019 is the official anniversary year.

The first Lamborghini Super Trofeo race was held in 2009, the grid was made up of race cars based on Lamborghini’s then current mid-engined V10-powered supercar, the Gallardo. After the road-going Huracán was released to replace the Gallardo, the race car changed to the newer model too. Then, for the 2018 season, Lamborghini updated the Huracán Super Trofeo with new rear quarter panels and a central fin to improve aero, a roof hatch to improve safety and a roof scoop that increases the engine’s torque slightly to create the Evo. It’s this car, with these improvements, that the 10th Edition is based on.

As the 10th Edition is, first and foremost, a race car, and so that it continues to conform to the Super Trofeo rules to keeping the racing as close as possible, all the changes are purely cosmetic. That means that the 10th Edition has the same 621bhp 5.2-litre V10 engine as the other Huracán Super Trofeos, the same six-speed X-Trac sequential gearbox and is rear-wheel drive only.

Get your tickets for the next evo Track Day here...