The 4000th Lamborghini Murcielago rolls out of Sant'Agata. And it's an LP670-4 SV 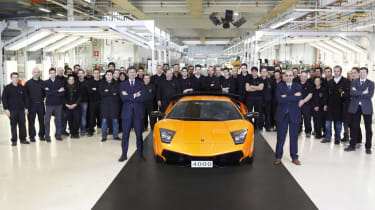 The 4000th Lamborghini Murcielago has rolled off the supercar maker’s Sant’Agata production line. And happily it’s the maddest of the bunch, a bright orange LP670-4 SV (just like the one that starred at evo Car of the Year 2009) that’s now heading towards its lucky Chinese owner. The Murcielago was Lamborghini’s first new supercar under Audi stewardship, and has been on sale since 2001. Its 4000 sales units mean it tops the car it replaced, the mighty Diablo, of which 2900 were sold in it 11-year life. Lamborghini president Stephan Winkelmann said – ‘the enthusiasm our products incite makes us proud and confirms that the company's product strategy and model range are a winning combination, producing exceptionally desirable super sports cars.’ Another of those exceptionally desirables will be the Murcielago’s replacement, rumoured to be called the Jota. It’s been spied out testing and should make its debut appearance next year, when it’ll have the Ferrari 599 GTO and new Pagani C9 supercar to battle, among others. Keep your eyes on evo.co.uk for the latest.