Land Rover has announced a new one-make series, called the 'Defender Challenge', which is to be run by Bowler. Details here 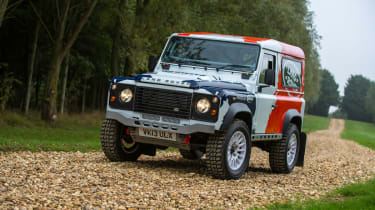 Ever fancied doing the Dakar Rally but wondered how you would learn the skills? I know I have (seriously, I have). Well Land Rover has just announced the launch of the Defender Challenge, a one-make series operated by Bowler Motorsport, and it could be the perfect route to eventually taking part in the Dakar and other rally-raid events.

The series will use competition prepared Land Rover Defenders like the one in the pictures. It starts life as a standard Defender 90 Hard top with a six-speed manual gearbox and a 2.2-litre diesel engine that is then uprated to 170bhp and 332lb ft of torque by Bowler Motorsport (The people behind such Dakar legends as the Wildcat, Nemesis and EXR). The suspension is completely revised, with new springs, dampers, roll bars and bushes, while the safety is taken care of with a full MSA-approved roll cage. Also inside you get bucket seats and six-point harnesses, an intercom system and a full fire-extinguisher system. Wheels are lightweight 18-inch items, while the control tyres are from Kumho.

Each car will remain road legal, but will also be fully FIA compliant, meaning that they are eligible to take part in international rally raid events. The price of all this is £60,000 (or £50,000 if you don’t need to pay the VAT).

The provisional list of rounds for the one-make series is a good mix of traditional rallies and events like the Welsh and Scottish Hill Rallies, which will provide, quite literally, a steeper leaning curve. In addition to the championship events (listed below) there will be a testing and training day as well as the opportunity to take part in desert events in North Africa and the Middle East. Think of it as a bit like a Caterham Academy for rally-raiding. The cost for the championship will be between £10,000 and £14,000 depending on the package chosen.

One of the encouraging things about the Defender Challenge is that it has already received backing from the ASO (Amaury Sport Organisation), which runs the Dakar. Xavier Gavory, Head of Competitors department – Sporting Coordinator for the ASO said: ‘One of the major obstacles for people from the UK wishing to enter the Dakar has always been obtaining the necessary competition experience and a race licence. With the Defender Challenge by Bowler, there is at last a turnkey solution to that problem… we are confident we will be welcoming the first graduates of the Defender Challenge on our rally in the very near future.’