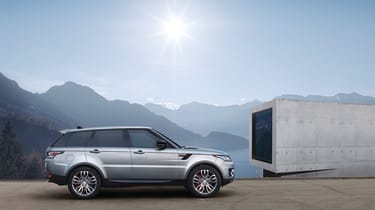 The Range Rover Sport is also the latest JLR model to receive semi-autonomous driving technology. Just like the larger Range Rover, one of the most useful for Range Rover owners will be Advanced Tow Assist, that can automatically park the vehicle when a trailer is attached and can warn if the driver is about to jack-knife the trailer.

The tech pack also includes Low Traction Launch for extra assistance on unstable surfaces, snow, or ice, and systems such as Autonomous Emergency Brake and Lane Departure Warning are standard.

As is InControl Touch Pro, the latest generation of JLR’s infotainment system. It’s smoother and more feature-packed than before and the main instrument panel allows you to view satellite navigation information.

If starting with technology and infotainment sounds a little un-evo it’s because the other changes are worthy, rather than exciting. In comes JLR’s 2-litre SD4 Ingenium diesel four-pot, the first of its type in a full-size Land Rover SUV. In this twin-turbocharged guise it produces 237bhp and 369lb ft of torque with a combined (though unlikely) average of 45.6mpg.

There’s a new 3-litre V6 too, which packs a supercharger for extra power and a balancer shaft for improved refinement. With 335bhp it reaches 60mph in 7.1 seconds from rest; the 2-litre diesel achieves the same speed in a surprising eight seconds flat.

3-litre SDV6 turbodiesel and 5-litre supercharged V8 engines are still available – the range topped by the £96,900 SVR. At the other end of the scale, the new 2-litre diesel models start at £59,700.

There’s little visually to distinguish the new Sport, other than the entry-level diesel’s single rear exhaust outlet. There’s a new ‘Bright Pack’ though, with matching silver bonnet mesh and grille, and there are 19 new premium colours offered by Special Vehicle Operations. The new models go on sale from winter 2016.