We’re set to see a battle of the mega-off-roaders as Land Rover has confirmed it won’t let Bentley deliver on its promise to create the ‘world’s fastest SUV’ without a fight. 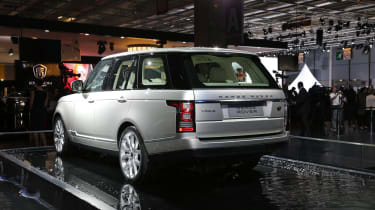 We’re set to see a battle of the mega-off-roaders as Land Rover has confirmed it won’t let Bentley deliver on its promise to create the ‘world’s fastest SUV’ without a fight.

Perhaps mercifully, the Bentley ‘9F’ SUV concept wasn’t at the Paris motor show; we’ll have to wait until next year to see the final production version. But directly opposite the Bentley stand the new Range Rover was making its international debut, with Nick Rogers, the car’s programme director, telling us that the company is prepared to develop it ‘where the market leads us… we have to cater for all kinds of customers, and if we don’t then we know they will vote with their wallets.’

And if that means substantial demand for mega-fast versions? ‘Well, we wouldn’t want to be slower than anyone else, would we?’ Rogers told us.

The new supercharged V8 Range Rover will be the first Land Rover product to have a 155mph resrictor, but Rogers confirmed that, without the limiter, it will already do ‘at least 186mph.’ Any performance version looking to match similar speeds would get some form of active aerodynamics, but the potential for three miles a minute in a two tonne SUV is definitely there…

Perhaps more surprising was Roger’s refusal to rule out a two-wheel drive version of the Range Rover. We’ve already seen 2WD Freelanders and Evoques, but most had assumed the Rangie’s go-anywhere credentials would always be more important than reducing CO2 outputs. ‘We’re not planning to do it at the moment,’ he told us, ‘but it’s definitely not a no-no; again, we will go where the market leads us.’