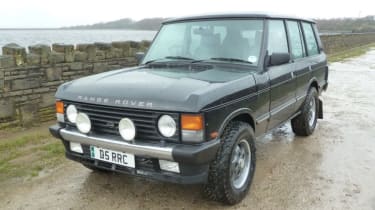 Given Overfinch is only creating one London Edition - broadly, it's just a shop window for the company's craftsmanship - the quarter-million special will no doubt find a home fairly quickly.

And that craftsmanship is undoubtedly impressive, even if you're not a fan of the fruits of the company's labour - thousands of slivers of walnut, abalone and stainless steel arranged to form some of London's most recognisable landmarks across the interior trim.

Perhaps that's what owners want these days, but we can't help pining for a time when Overfinch was known not for its woodworking abilities, but its very real talent at turning sluggish, roly-poly land vehicles into barnstorming SUVs that could give contemporary sports cars a fright.

It typically did so by extracting whatever engine currently lurked under the Range Rover's clamshell bonnet (usually a Rover V8) and replacing it with a powerful, reliable and crate-fresh GM-sourced V8. 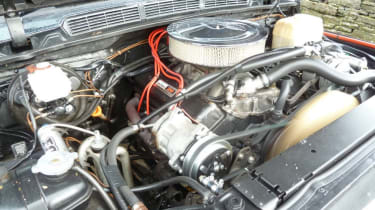 570i models, for instance, used a 5.7-litre Chevrolet V8 pumping out as much as 284bhp. Doesn't seem too special today - an entry-level TDV6 develops little less - but even the punchiest 4.2-litre Range Rover Classic made just 200 horses back in the day, so the near-50 per cent increase was a significant step up.

As were Overfinch's suspension modifications. If you've been reading car magazines for a suitable length of times you'll remember seeing shots of Range Rovers listing like an Ocean Race yacht, but an Overfinch equivalent would remain largely flat.

Conveniently, we've found just such an example for sale, located at the Land Rover Centre in Huddersfield, via Classic and Performance Car.

Front spotlights aside it's amazing how subtle it now looks next to current Overfinch products (and indeed, current, slightly chintzy Range Rovers), but still features some of the desirable period extras, such as Ferrari-style orange graphics to the dials and a four-spoke sports steering wheel.

There's a sneaking suspicion that climbing behind the wheel of such a car would only be a disappointment these days - even the most basic SUV today is fairly "car-like" to drive. But for character and taste, you probably can't do much better.