Lexus to build production version of the LF-LC concept 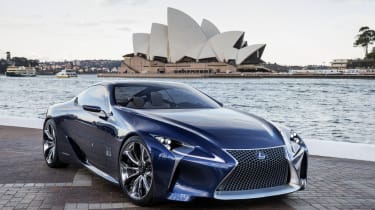 Lexus has confirmed that it'll be building a production version of its LF-LC concept. As one of the stars of the 2012 Detroit Auto Show, Lexus claims that the LF-LC won't be a successor to the tech-infested LFA, but rather its own, more affordable sports offering.

That should mean that its price will be far a far cry from the £350,000 required to buy one of the 500-run LFAs, and also confirms that that car's stunning V10 engine won't make a return. (You remember, the V10 that with a gorgeous 90s F1-esque voice and ultra-sharp throttle response? We digress...)

So the LF-LC, what do we know? Not a lot at all, but we reckon it'll probably feature a hybrid powertrain - 98 per cent of Europe destined Lexus are hybrids - and could produce around 500bhp. To note, the LF-LC concept produced 500bhp from its efficient Atkinson cycle petrol engine and advanced high-energy battery pack with an electric motor.

The concept was also constructed of carbonfibre and aluminium to keep weight down. The production car will probably wear more of the latter, given the production costs of carbon.

The announcement of the production LF-LC comes at the same time as Lexus Europe Vice-President, Alain Uyttenhoven, confirmed that the brand will try to become 'more emotional.' Uyttenhoven has also expressed desire to give Lexus cars a more recognisable image, following a trend set by Audi and BMW with their more consistent 'faces' across the range.

Target rivals for the LF-LC look likely to include the Mercedes S-Class Coupe and Maserati GranTurismo, so using that as a bass for a guestimation, prices will probably hover around £100k. When will it arrive?  Lexus says the LF-LC was almost production ready, so we're hopeful it's not too long...

In other news, Lexus will unveil its LF-C2 at the LA auto show. Essentially a drop-top Lexus RC coupé, the four-seater roadster will be shown on 19 November. We'll have full specs and details up on evo as soon as it is.