Lexus has unveiled its LC-F2, a roofless concept tipped as a base for the forthcoming RC convertible 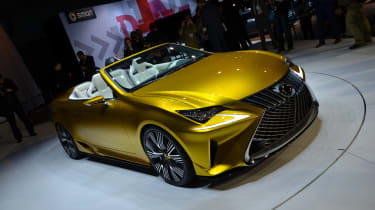 Lexus has pulled the covers of its LF-C2 concept at the LA auto show, a 2+2 roadster based on the Lexus RC. Painted in a striking golden-yellow colour, the concept is completely roofless and wears an ‘experimental’ version of the brand’s spindle grille.

The exterior is basically that of the RC with its roof chopped off, with a similar angular nose and sharp tail now joined by 20-inch wheels, as well as two raised shoulders that feed off from the rear seats. If (or shall we say when?) the car makes production, we can probably expect an electric folding roof to be included too.

Inside, a clutter free dash features a central display with a remote touchpad, and is joined by an analogue clock, a thick leather-bound steering wheel and leather seats. The exterior’s bold colour feeds into the cabin along the central tunnel to create a rather brash colour scheme.

There’s no word of what’s under the bonnet, but Lexus' 2.5-litre four-cylinder hybrid and 3.5-litre V6 powertrains look most likely be included in the options for a production version, the latter unit sending as much as 306bhp to the rear wheels.

We can't be sure when the convertible version of the BMW 4-series rival will land in showrooms, but since the RC coupé is available to order now, we'd expect the drop-top version to follow in 2015.

It's been a busy month for Lexus as the carmaker also recently announced that it'll be building a production version of its stunning LF-LC concept.