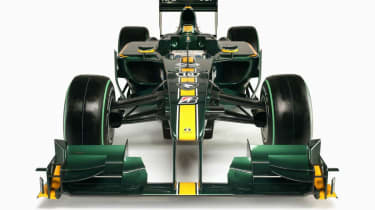 The green and yellow cars are back. This isn’t Team Lotus, but the men behind Lotus F1 Racing are very aware of the heritage behind the name and hope to do it justice. Whether they can achieve that this season may be a lot to ask, they were only granted an F1 licence back in September.

The majority of the funding comes from Malaysia but the new team is based in Norfolk and led by Chief Technical Officer Mike Gascoyne. Lotus Cosworth T127 was unveiled at London’s Royal Horticultural Hall by drivers Jarno Trulli and Heikki Kovalainen, and will be joining the rest of field for pre-season testing in Jerez later this week.

At the launch Team Principal Tony Fernandes said: ‘Now we’ve achieved two major milestones; confirming our entry and unveiling our car, but now the real work starts. Next we move on to testing and the season ahead and I’m confident that the team will exceed expectations wherever we go, and will do so on a wave of support around the world that has been growing daily since we first unleashed Lotus Racing back in September ’09.’

Mike Gascoyne then added his thoughts, saying ‘The last few months have been some of the most challenging of my career, but it’s been a challenge the whole team and I have thrived on since we first started work on the car up in Norfolk. I’m delighted that we’ve reached this point, and now we have a beautiful car that gives us a great base to work from for the season ahead and a fighting chance of going racing in the right way, with a winning mentality. The hard part starts now, and I know everyone in the team and I are up for whatever lies ahead.’

For a more in-depth look into the Lotus and an interview with Jarno Trulli, grab a copy of evo 142, on sale Weds March 3 2010

In the meantime tell us what your all-favourite Lotus F1 car is. Ours is the 72, which racked up no fewer than 20 wins (all with Cosworth power), and was the first F1 car to feature side mounted radiators, which allowed for a wedge-shaped nose. Do you agree? The forum's the place to say...

The global pandemic might have delayed proceedings, but a new video gives us our best look yet at the Lotus Evija hypercar
Lotus launches track-oriented digital dashboard for Elise and Exige