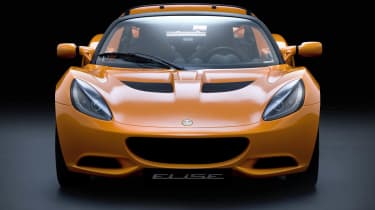 Lotus has updated the Elise sports car ready for unveil at the 2010 Geneva motor show. The lightweight roadster has been around nearly 15 years now, and since 2001 in its current, ‘Series 2’ form. And it’s downsizing – the entry-level Elise S will now come with a 1.6-litre petrol engine good for 134bhp (at 6800rpm) and 118lb ft (at 4400rpm). That’ll shift the car’s 876kg kerb weight (plus driver) to 60mph in 6.0sec, to 100mph in 18.3sec and onto a 124mph maximum. Nothing particularly startling in the performance department, then, but the real reason for the new in-line four is its emissions and fuel economy, sub-155g/km and 46mpg respectively. That sets the precedent for the rest of the roadster’s range, the 189bhp 1.8-litre Elise R and its 217bhp supercharged sibling both going sub-200g/km. It’s thanks in part to the subtle styling revamp, a redesigned bumper, splitter and clamshell up front and new rear bumper and mid-mounted-engine cover helping the Elise to cleave through the air with less effort – there’s a four per cent reduction in drag, cutting fuel use and carbon emissions. Stylistically, the car’s a step sideways rather than forwards. There are influences from the Evora (evo’s 2009 Car of the Year) and a faint whiff of Ferrari California (check out the front static shots), but overall the Elise has lost its edge a bit. It’s all opinion of course, so let us know what you think on the evo Forum. The new Lotus Elise will get its grand unveil at the 2010 Geneva motor show (roundup here) on March 2. We’ll be reporting live from the show, so check back on evo.co.uk for the latest performance and concept car news. The supercharged Elise takes on its Tesla electric cousin Gallery of the Lotus Formula 1 car was revealed this week Follow evo on Twitter and Facebook for car news and views