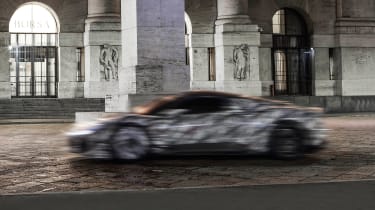 Maserati doesn’t appear to be slowing down its workload amid northern Italy’s current conundrums, with a full, body-on prototype version of the new MC20 supercar now testing. The new MC20 will pave the way for a number of new models, the MC20 (Maserati Corse 2020) is set to be the marque’s flagship machine, and will take it back to the circuit.

Aside from a name, details are predictably few and far between. Rumours point towards the use of a mid-mounted V8 or plug-in hybrid V6, but with Maserati currently developing an all-electric powertrain, it might follow in the footsteps of the Alfieri concept. Under the skin was a three-motor, 800V system, a powertrain that would put the MC20 up against the likes of Rimac's C_Two and the Pinninfarina Battista should it adopt it.

Whatever the choice of powertrain, with the MC20 described as a 'natural evolution of the highly successful MC12' of 2004, it’s safe to assume it’ll be quite a performance machine, in both road-going and track-only forms...

Earlier this year, a comprehensive investment plan detailed a slew of new models set to join Maserati’s line-up, including not just SUVs and EVs, but the aforementioned super sports model. This renewed investment comes after parent company FCA’s merger with French conglomerate PSA late last year, with Maserati now forming the flagship brand across the merger.

Starting in late 2020, Maserati will commence production of its all-new petrol-powered super sports car based on the Alfieri concept shown way back in 2014. This model will be built in Modena alongside an update to Maserati’s Viale Ciro Menotti central plant to facilitate the new model, including a new paint shop. 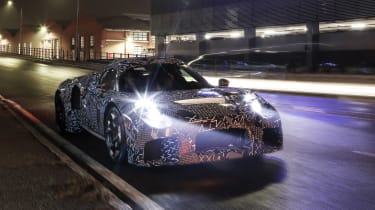 It would be remiss of us if we weren’t a little skeptical of Maserati’s grand plans for its next rebirth, but with a much larger and more confident conglomerate behind it in both FCA and PSA, plus a more defined roll not only as a luxury flagship brand, but also as a technical leader, it could finally be the jump-start Maserati has been crying out for.