Maserati has revealed the GranTurismo MC Stradale, a more hardcore version of the four-seater GT car 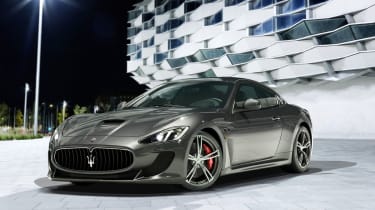 Along side the new Quattroporte, Maserati has revealed an updated GranTurismo MC Stradale model, which sees the re-introduction of the GT car’s rear seats. Further improvements in efficiency have been promised, with a number of cosmetic changes.

First introduced in 2011 as a more hardcore option to the regular GranTurismo S, the MC Stradale offered buyers a more focused driving machine. For 2013, Maserati has given the GT car a new carbon fibre bonnet, with a central air-scoop. The rear of the car has been given a slight update too, with a new-look rear bumper.

Forged 20-inch alloy wheels complete the model’s new look, and inside Maserati will offer ‘new materials and style’. Power is set at the same 453bhp, as with the recently launched GranTurismo Sport, thanks to the continued use of the 4.7-litre V8 engine. This is paired up to a six-speed automated manual gearbox for a claimed top speed of 188mph.

Other changes are minimal, but the braking system has been improved with the addition of new carbon-ceramic Brembo discs. Pricing is unconfirmed, although it is expected to be around the £110,000 mark, similar to the two-seater version.