If you like your coupes with style, performance and daily-driver practicality, the Maserati ticks all the boxes. Here's what to look out for 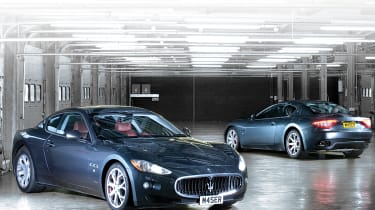 We spoke to Richard Lukins at independent Maserati specialists Fiorano Cars, who told us that he has seen very few GranTurismos displaying anything that looks like an inherent problem. This may be because it’s still a young model and issues will develop as mileages grow, or it could be simply because the GranTurismo is a very well put together car.

With almost all GranTurismos on UK roads still under warranty, any initial issues will be dealt with as a matter of course. However, there are still a few points to be aware of if you want to start out with the best possible example.Engine

The V8 in the GranTurismo is fundamentally the same unit as found in the 4200 and the Quattroporte, and, like them, it can develop oil  leaks. ‘The GranTurismo is far less likely to develop a leak than earlier models,’ says Richard Lukins, ‘but we have still seen examples where oil leaks from both the upper and lower front covers.’

Lukins also says there were reports of issues with the cam variators on early examples. ‘The key is to check that the car has had any factory recalls applied to it,’ he recommends. Transmission

The ZF automatic transmission is virtually bulletproof. However, Lukins suspects that, in time, GranTurismos may need to be checked for lash (unwanted slack) in the differential. ‘Late Quattroportes tend to suffer from differential lash, and because the GranTurismo uses the same final drive, I would expect to see this develop in older or higher mileage cars.’

He also mentions that cars equipped with the Cambiocorsa gearbox tend to use clutches sooner than you’d expect with a traditional manual transmission. ‘The clutch will last the same number of changes, but because of the addictive nature of the transmission system, drivers tend to make more gearchanges for a given distance.’

The GranTurismo is heavy on brakes – it weight almost two tons, remember – and so it can wear them quickly. ‘You can get to the inner face and run your finger out from the centre of the disc to feel for scoring, ridges or rust,’ suggests Lukins.

GranTurismos tends to eat through tyres quickly, mainly as a result of the way they are driven. Lukins also recommends that the tracking is checked at least annually, as specified in the handbook, since it can easily be knocked out of alignment by potholes, for example.

Something else Lukins has seen are rusty wheel bolts. ‘Maserati changed the style of wheel bolt for the GranTurismo and they rust very quickly. We offer a replacement which is made in the UK and offers better corrosion resistance.’Bodywork

The build quality from the factory is very good, so check carefully for any uneven panel gaps or colour differentiation, which could indicate the car has been damaged and repaired in the past.

The interior is very well put together. However, there can be electrical issues. ‘The rain sensors for the automatic wipers can play up on early models,’ says Lukins. ‘There can also be problems with the rear lights, with flickering or the central brake light staying on. This is an ECU problem and can usually be cured by reflashing.’

Lukins recommends that GranTurismos are not jump-started. ‘We’ve seen cars with blown airbag ECUs because of a voltage spike when jump-starting,’ he says.

One Maserati trend that the GranTurismo bucked was appalling depreciation. In fact, it topped the tables in Glass’s Guide’s prestige car values early in 2010. This means that an early 2007 model will cost from £50,000, while being a year younger doesn’t tend to add a huge amount to that. However, the big price hike arrives when you start to look at the S model; a 2008 S will cost close to the £70,000 mark while a late 2009 example will start to approach £80K.