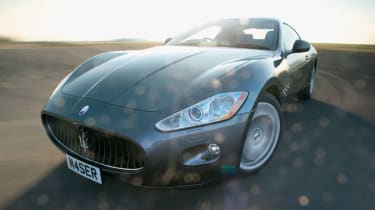 So what do we know about the GranTurismo? Well, we know it needs to capitalise on the company’s hard-won momentum to win plaudits in a burgeoning sector crammed with high-performance cars from premium brands. Were we not such big fans of the Quattroporte, we might think that too great an ask, but a tireless programme of constant improvement has honed the ‘four-door’ into a truly great car, and as the GranTurismo is, in overly simplistic journalistic terms, ‘a shortened Quattroporte’ the omens are good.

As all GranTurismos currently come with six-speed paddle-shift ZF auto ’boxes, Maserati’s ubiquitous 4.2-litre naturally aspirated V8, and 330mm drilled and vented cast iron discs with Brembo callipers, there’s little scope for any major hardware changes. That said, he’s done what he can, shunning the show-off 20in ‘Birdcage’ alloys in favour of standard 19in rims and optional ‘Skyhook’ switchable damping, while a fetching shade of Grigio Palladio paint sets the voluptuous curves off to magnificent effect.

At almost 4.9 metres in length, the GranTurismo is a big car, but it doesn’t look it from the outside and it certainly doesn’t feel it from behind the wheel. Yes, the fat, plunging A-pillars can slice through your field of vision, but visibility is otherwise good, and you get a great view out over the sharp-edged arcs of the front wings, which protrude like Sophie Ellis-Bextor’s cheekbones. The seats don’t yield as much as their plump padding suggests, but they hold you in place well enough. Electric seat adjustment, manual height and reach adjustment for the steering wheel and a generous quota of head and legroom enable the GranTurismo to accommodate all sizes, from a 4ft 9in Meaden to 7ft 4in Catchpole.

Twist the key, wait a moment as the starter whirrs, then smile as the V8 catches with a meaty pulse. It sounds and feels more muscular than in the Quattroporte, more controlled too, thanks to a throttle action that allows you to pull away smoothly once you drag the stubby selector back into D. The steering has a similarly measured weight and response, but while the toned-down throttle is immediately satisfying, first impressions of the steering are that it isn’t especially lively or feelsome.

It’s not too much of an issue on the drive to Millbrook, but the motorway and fast A-road stint is a good opportunity to see how well the GranTurismo settles into a high-speed cruise. When you simply want to make progress there’s little need to stray from D, for the ZF ’box feels well dialled-in to the needs and character of the revvy V8, squeezing the torque into the tarmac without resorting to a premature and distracting burst of kickdown. Should you wish to stir up a bit more action, the paddles are always live, so you can flip down a couple of gears while still in auto mode, then let it continue to do its own thing once more.

Though it does an admirable job of flexing what muscle the 4.2-litre V8 has to offer, the truth of the matter is that the GranTurismo is chunky at 1880kg and its motor likes revs, not chugging along. As a consequence the GranTurismo can’t match the effortless surge of torque you get from, say, a supercharged Jag or big-capacity AMG V8. What it does possess is a rich, baritone voice and – as a furtive foray beyond 5000rpm reveals – a truly impressive top-end rush. If you’re used to a more torque-rich delivery, the Maserati will lack the kind of point-and-squirt performance you might expect, but if you like the sensation of feeling and hearing a memorable engine hit its stride, the Maserati is a rewarding car to wring-out.

With the fuel tank brimmed, the Racelogic test equipment suckered to the windscreen and Catchpole and I casting concerned eyes at the greasy-looking surface, the Maser’s ready to do battle with the Mile Straight. We attempt to measure the in-gear performance, but even with Manual selected for the gearbox and the Sport button pressed (which brings more aggressive shifts, weightier steering and firmer damping), the GranTurismo won’t hold a gear to the limiter, so we’re reduced to slotting D and mashing the throttle.

With the MSP traction and stability control disabled there’s a brief spike of wheelspin, which is encouraging, but only for as long as it takes the auto ’box to panic and select second gear. The resulting 6.1sec to 60mph is poor, so we elect to try the runs with MSP engaged and are pleasantly surprised when the rear wheels slip for an instant, then find enough traction to avoid that early upshift. We nail a much more respectable 5.5sec in both directions, with 100mph arriving in 12.7sec. Warm, dry conditions would shave a tenth or two from that, which brings us closer, if not equal to Maserati’s claimed 0-62mph time of 5.2sec. It’s a respectable set of figures: competitive against its closest opposition, but not class leading.

Against my better judgement we console ourselves by heading out onto Millbrook’s High Speed Circuit. The Maser whistles up to 150mph, but I’m spooked by the shaded side of the circuit, which remains fully damp, and decide to back off. It’s that lack of front-end feel that’s bugging me, but as I ease down from the top lane a delayed surge of adrenalin kicks in and with it comes a bit more courage. Our next effort is more concerted and we reach 164.3mph (in 5th) before I decide that repeatedly making the transition from dry to greasy concrete while pulling 1.2 lateral g really isn’t fun. Even so, once allowances have been made for lateral scrub, the Maser’s pretty much on the money.

We take the long way back to the office, shunning the M1 in favour of some varied B-roads. Almost immediately I find myself shuffling between Sport and Normal settings, as though hunting for a happy medium that isn’t there. The GranTurismo is always on the firm side of comfortable, and while it’s content to settle on smooth surfaces, whenever the road displays a coarse surface there’s an underlying fidget that’s hard to ignore. As speed and commitment increase you begin to look for ways of improving the steering feel either side of the straight-ahead, so you finger the Sport button and find it – at least partially – but with it comes a more pronounced patter as the Skyhook suspension tenses for action.

This slightly brittle feel to the damping is frustrating rather than truly unsettling, but you do find yourself wishing for five per cent more pliancy at that moment when a wheel and a road imperfection collide. Once settled, the chassis is well-balanced, with excellent reserves of grip and traction, and a predictable, progressive breakaway when the limit is breached, but you never get quite enough feel through the wheel. Likewise the brakes, which share the steering’s rather aloof initial feel and ultimately lack the kind of confidence-boosting bite you’d expect of a near-180mph GT. Different pads might cure the problem, but it’s something that needs addressing.

Push through the steering’s woolly zone and the GranTurismo becomes more talkative, making the kind of poised, rewarding progress a fine GT should make. Though it always feels wieldy and willing, it’s a bit broad to hustle along country roads, but still you never get that runaway-train sensation you do when hustling a Bentley Conti GT along. And with a reach in third and fourth gears that borders on epic, you can string whole sequences of corners together in one unbroken flow. Shame about those brakes though.

ConclusionsWe like the GranTurismo, really like it in fact. A bigger, more mature experience than Aston’s V8 Vantage, yet sharper and more engaging than a DB9 or Bentley Conti GT, it manages to combine the edge and infectious enthusiasm of a sports car with the long-legged, refined and sophisticated demeanour of a great GT.

It has flaws, though. For some the Maser’s out-and-out pace and ability is academic because its V8 engine simply doesn’t have the grunt to give it the kind of instant, any gear, any revs performance they’re used to from their Bentley or Benz. We can sympathise with that view, but the more highly strung Maserati V8’s charms are cerebral as much as visceral, with the pleasure coming from the act of extracting the performance rather than the fairground ride sensation of monstrous, torque-rich acceleration.

Perhaps more disappointing is the steering’s lack of tactility and the Skyhook suspension’s fidgety damping, both of which could and should be better. If they were, we’d be compelled to elevate the GranTurismo’s rating from our original four-star verdict, but as it stands there’s room for improvement. It’s a good car rather than a great one, then, but still one we’d defy anyone not to fall for in a big way.