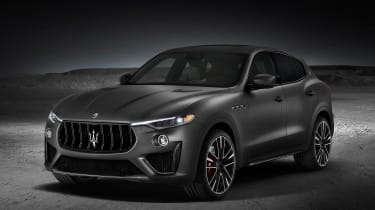 Maserati has revealed a new performance variant of its Levante SUV at the New York motor show. Called the Trofeo, it’s far more than just a recalibration exercise, as this is the first time Maserati has fitted a V8 engine to the Levante. It’s also only the second application of this Ferrari-derived 3.8-litre biturbo motor after the Quattroporte GTS saloon.

The headline figures are instantly startling, with a peak power figure of 581bhp at 6250rpm, and 539lb ft of torque in a plateau between 2250 and 5000 rpm. That headline power figure puts the Maserati some 39bhp ahead of both the new Porsche Cayenne Turbo and the also-recently-revealed Jaguar F-Pace SVR, and a modest 4bhp up on the Mercedes-AMG GLE63 S.

> Click here for our review of the Maserati Quattroporte GTS

Designed and built in Maranello by Ferrari, the 3.8-litre twin-turbo V8 has been given a generous power bump over its application in the Quattroporte saloon, where it produces 58bhp less. The increase has been achieved by the use of new turbochargers, a redesigned cylinder head and bespoke valves, pistons and connecting rods. 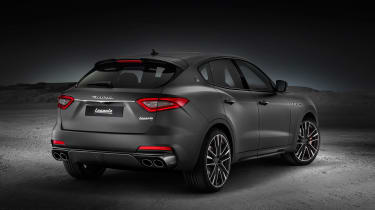 The engine is connected to the same eight-speed ZF automatic gearbox as in the Quattroporte, but in the Trofeo all that power and torque is sent to the road via Maserati’s rear-biased Q4 all-wheel-drive system. The company’s Skyhook adaptive dampers and air suspension is standard fit, and should help contain the extra unsprung mass of the new 22-inch wheels. A Corsa mode has been added to the car’s electronic systems, bringing with it a launch mode that will help the Trofeo reach 62mph in just 3.9 seconds – pipping all of the aforementioned rivals by a few tenths. The top speed is quoted at ‘over’ 186mph.

Visually, the Levante maintains its overall SUV stance, but Maserati’s designers have significantly opened up the front air intakes and lowered the car’s chin. This more purposeful look is completed with new side sills and a more aggressive rear bumper treatment, all with a clever integration of carbonfibre that seems to punctuate the bodywork, rather than just be slapped on top of it. New matrix-LED headlights also help freshen up the front-end.

The SUV proportions are bolstered with the integration of those 22-inch wheels (an increasingly common size on sporty SUVs) and a subtly kicked-up rear wing. Maserati’s typically restrained use of brightwork and a new Trofeo badge on the D-pillar also add to the effect without looking too garish.

Inside the cabin, the changes are more subtle, with the most obvious changes consisting of a new central clock, a new gear selector and larger aluminium paddles situated behind a reshaped steering wheel. 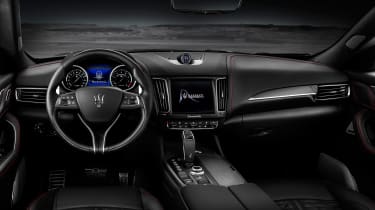 Production will commence in the summer, although first allocations of the vehicle will likely head to Maserati’s strongest markets: the US and China. An on-sale date in the UK has yet to be confirmed.

The Levante Trofeo’s introduction comes as no surprise, as a high-performance SUV is now considered an essential flagship model by premium manufacturers. Not only has the Levante got traditional rivals such as the Porsche Cayenne Turbo and Mercedes-AMG’s various SUVs to deal with, but the Jaguar F-Pace SVR, Lamborghini Urus and Alfa Romeo Stelvio Quadrifoglio will also be inevitably compared. What this does confirm, however, is that the dawn of the 650bhp SUV is probably not too far away, as Ferrari will want a substantial gap between its incoming hyper-SUV and the Levante Trofeo. 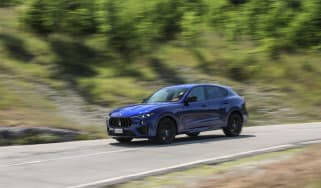 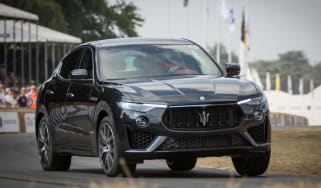 Maserati Levante Trofeo and GTS confirmed for the UK