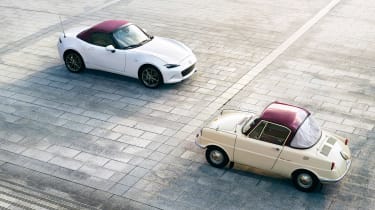 New for the 100th Anniversary model is the contrasting use of a pearlescent white paint finish and burgundy trim, as found on the seats, floor mats and stitching. This is joined by a dark cherry fabric roof on the outside, itself contrasted with bespoke badging and an embossed headrest with a logo harking back to the original once used by the Toyo Cork Kogyo company, which eventually became Mazda. 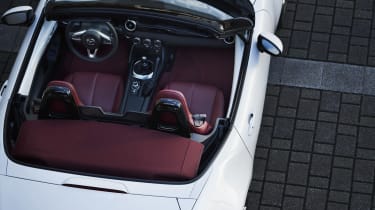 Unlike the 30th Anniversary MX-5, it does without any mechanical upgrades, but should feature the sweet 181bhp 2-litre four-cylinder and six-speed manual combination that already works so well in standard models.

The MX-5 will be joined by 100th Anniversary special-edition versions of the Mazda 3 and CX-30, in both cases featuring the same pearl white exterior paintwork matched to a bespoke interior. There are other subtle changes, including the 3’s chrome grille treatment (usually reserved for the Mazda 3 saloon) and a two-tone interior combining burgundy seats and white dash trim.

Joining a 2020 model range that was lightly updated earlier this year, a total of 100 units of each will be available in the UK arriving later in the year. Specific equipment specifications and prices are still to be confirmed.