Mazda itself is 100 years old in 2020, but it’s also celebrating a different anniversary this year 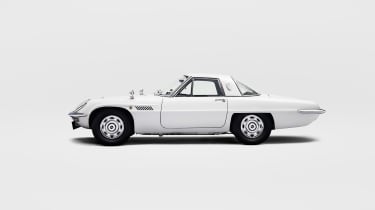 Few words in the motoring lexicon are as widely abused as ‘coupe’. The term is used these days to cover everything from vaguely swoopy four-door saloons to hunchbacked SUVs. By comparison, traditional coupes have never looked better, with neat proportions, clean lines, and of course, the correct number of doors: two. One brand that seems to have understood the genre since the start is Mazda, celebrating a full 60 years of coupe models in 2020.

And while coupes have often had a reputation for style over substance, that’s not something that could be levelled at many of the vehicles built in Hiroshima. Not only was Mazda’s very first passenger car a coupe – albeit a particularly bijou one – but many of its most famous models fit the description, from every generation of rotary-engined RX-7, to compact V6-powered models such as the MX-3 and MX-6, and high-end performance cars such as the Cosmo.

There have been plenty of more obscure examples too, with cars that only trickled into the UK in tiny numbers and a handful that never made it in officially at all. Mazda has of course played fast and loose with the coupe definition a couple of times – attractive though they were, we’d stop short of calling the old five-door, fastback Mazda 323Fs coupes – but we’ll forgive it that for the models that fit the definition to a T. Or maybe a C.

Unfortunately, Mazda’s current range has rather fewer coupe options, the closest being the MX-5 RF with its coupe silhouette and retracting hard-top roof panel. Hopefully Mazda has another rotary-engined RX in the pipeline, but in the meantime, click on any of the images on this page to head to a full gallery of Mazda’s coupes. 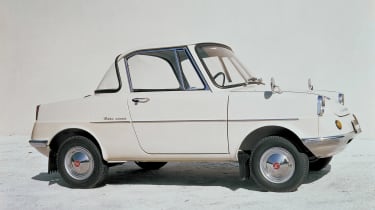 You could call it a mark of intent that Mazda’s first volume production car was a coupe. Japan conceived its kei-jidosha ‘light automobile’ regulations in 1949 for much the same reasons bubble cars sprung up in Europe post-war, and by 1955, 360cc engines had been mandated.

Most kei cars, as they do today, prioritised a simple and austere practicality, but it didn’t take long for sportier models to arrive. The R360 was sportiest of the lot, incredibly light at 380kg (offsetting a 16bhp output!) and hugely successful, dominating the kei car market with a full 65 per cent share. It was joined in 1962 by another tiny coupe: Mazda’s Carol P360. 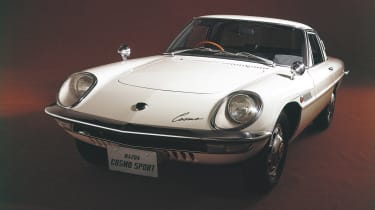 Mazda had been building production road cars for only seven years by the time it launched its first sports car, and as would often be the case in future, it didn’t do things by half measures. The first Cosmo, launched in 1967, was the first Mazda to feature a Wankel rotary engine, and launching the same year as the NSU Ro80, among the first rotary road cars full stop.

The Cosmo 110S was more exotic than the NSU however, taking the form of a tiny but sleek two-seat sports car. Its 982cc twin-rotor engine produced 110bhp initially (and 130bhp later on), and did so with a smoothness quite unlike any other production engine short of V12s. If you want to find the start of Mazda’s performance coupe lineage, the Cosmo is it. 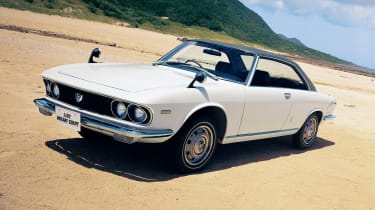 One of the most beautiful cars ever to have come from Japan, the smooth, sleek likes of Mazda’s R130 Luce were perhaps unsurprisingly crafted by a master of the art: Giorgetto Giugiaro at Bertone.

A two-door, pillarless coupe with Japan’s almost de-rigeur wing-mounted mirrors, it’s also unique among Mazda’s back catalogue as its only front-wheel-driven rotary model. It topped the smaller RX-2 and RX-3 in Mazda’s range, and was replaced in 1974 by the rear-wheel-drive – but much less attractive – RX-4. 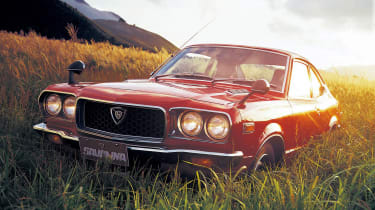 Vanishingly few Mazda RX-3s ever made it to the UK, which is a great shame. And not just because, like several cars here, the RX-3 is quite easy on the eye – there are hints of Mk2 Ford Escort in the shape, but the details are more distinctive. Three-sided rotary emblems abound too, not least in the car’s grille logo.

No, the real reason is that, as we discovered a couple of years back, the RX-3 is huge fun to drive. Granted, Mazda’s UK heritage fleet example is fitted with a later 12A engine from an RX-7, and this gives it a greater turn of pace than in period. But the response, fantastically angry soundtrack and slick gearshift made for an addictive combination. Amazing that the RX-3 was, at one point, simply one of Mazda’s family cars. 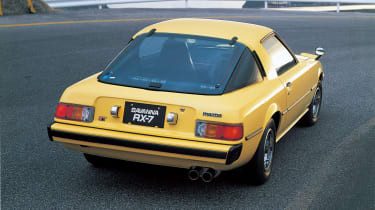 This is where the RX-7 story started, just a few short years after the Porsche 924 that the early RX-7 would inevitably be compared to once the group tests began rolling in. And while the pair share a similar silhouette, it comes as little surprise to learn Mazda went its own way in most other areas.

It was rotary-powered for a start, with early cars using a 1.1-litre ‘12A’ unit, with a larger 13B finding its way in before the RX-7 bowed out in 1985. At little over a ton it was light too, with a favourable weight distribution thanks to the tiny engine sitting behind the front axle. 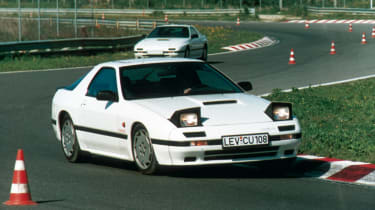 Just as the first-generation RX-7 had hints of Porsche 924 about it, so the second-gen car existed in the era of the boxier 944. Once again the RX-7’s styling was distinct from that of its German rival, and as ever, so too was its power source.

The FC RX-7 currently exists in something of a limbo between the classic original and the beautiful third-generation car, but along with the distinctive 1980s styling it was also more sophisticated, with independent rear suspension, a rack and pinion steering set-up and in some models, a form of active suspension. 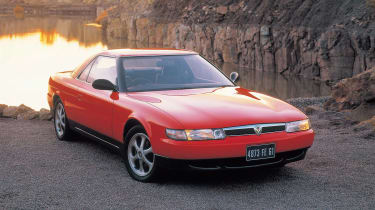 1990’s Mazda Cosmo will go down in history as the first production car ever to offer a touch-sensitive screen with a satellite navigation system, but there was much more to this sleek early 1990s coupe than just technology.

Actually, not a lot more, but that’s not to denigrate the Cosmo because its technology alone was a huge part of its appeal. The fourth generation of car to wear the Cosmo nameplate, it was a technological flagship for Mazda, using a three-rotor Wankel engine (with twin turbochargers), electroluminescent gauges, and electronically controlled transmission. And the styling, of course – understated and as smooth as a bar of soap. 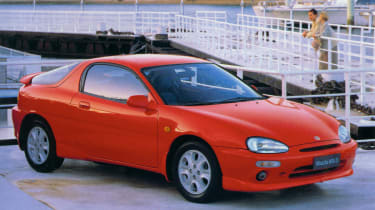 Yet another Mazda produced during Japan’s bubble economy, the MX-3 is a car it’s hard to imagine existing in any other time: a compact coupe powered not by some carry-over four-cylinder but by a tiny, 1.8-litre V6.

In a market with so much diversity that made the MX-3 easy to stand out, with no rival offering so many cylinders, nor such a smooth, turbine-like powertrain. It wasn’t that powerful, at only 130bhp, but Mazda did nail the marketing at the time, pitching the car as an alternative to hot hatchbacks. Given the popularity of hot hatches diminished during the ’90s and coupes prevailed, it looks like Mazda was on the right track. 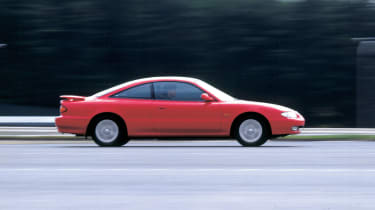 The MX-3 wasn’t the only Mazda coupe launched in 1991. Further up the food chain was the MX-6, also using V6 power and previewing, with its smooth lines and understated details, the look that would later appear on the third-generation RX-7.

The MX-6 was more of a cruiser than the RX-7 though. With four seats, front-wheel drive and a smooth but not especially powerful 2.5-litre V6 under the bonnet, the car very much prioritised style, though contemporary reviews were nevertheless favourable about its handling too. If you weren’t keen on the looks, you could always opt for the MX-6-based Ford Probe, too... 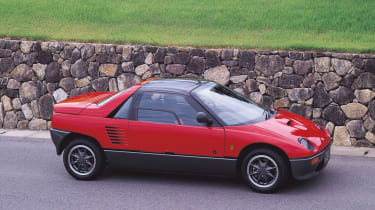 1960’s R360 showed Mazda was no stranger to building sporty kei-jidosha city cars, but 1992’s Autozam AZ-1 could be the ultimate expression of the craft. A joint project with Suzuki, and using the same three-cylinder turbocharged power plant as the Cappuccino, this was a kei car like no other.

While it fit within the necessary dimensions for Japan’s city cars, the mid-engined layout, gull-wing doors and plastic panels were anything but conventional. Despite the tiny engine it was as quick as an MX-5, hitting 62mph in 9.2sec, but then it had similar pricing too – and if you want to buy one today, they’re comfortably more than even the tidiest early MX-5. 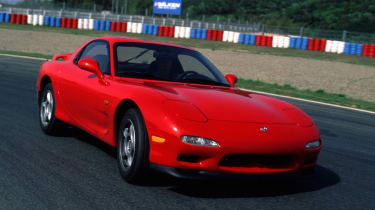 One of Mazda’s most famous cars, certainly one of its most desirable, and perhaps also one of the best the Hiroshima-based company has ever made. Star of video games and the silver screen, the third-generation Mazda RX-7 was powerful, balanced, and strikingly beautiful.

Power came from a two-rotor Wankel engine with a nominal 1.3-litre capacity, but twin sequential turbocharging boosted output to the Japanese ‘gentleman’s agreement’ 276bhp in Japanese form (UK models had 237bhp). Even lower-powered UK models were good for 0-60mph in 5.4sec and a 156mph top end. The MX-5 may be more prolific, but the RX-7 was Mazda’s true flagship. 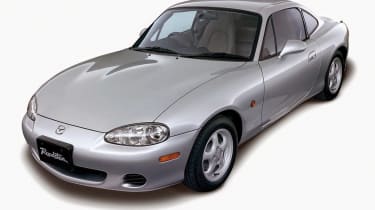 Perhaps the least-known coupe Mazda has built, but for a select band of enthusiasts, also one of the most intriguing cars Mazda has ever sold. Mazda had previewed several fixed-roof MX-5s over the years, but only in 2003 did it produce a small number of factory cars, based on the facelifted version of the second-generation ‘NB’ MX-5.

It’s believed fewer than 200 were built, with a proper steel roof welded to the MX-5’s shell. Models were split between 1.6- and 1.8-litre cars, with three trim levels – a conventional Type S, a bodykitted Type A, and an ungainly retro-style Type E. 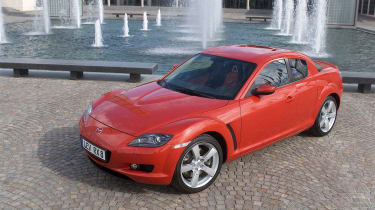 When the rotary engine returned to the Mazda range in 2003 it did so in a very different form to the old RX-7. Out went twin-turbocharging, and in came natural aspiration, with an entirely new power unit dubbed ‘Renesis’ and a platform that later lent itself to the third-generation MX-5.

But when discussing Mazda’s coupes, it’s perhaps the RX-8’s styling that should get the most attention. With four proper seats and a pair of rear-hinged ‘suicide’ doors from which to access them – a similar layout was later used on BMW’s i3 electric car, and will be used again on the upcoming electric MX-30 – the RX-8 had a unique selling point greater even than its rotary engine. 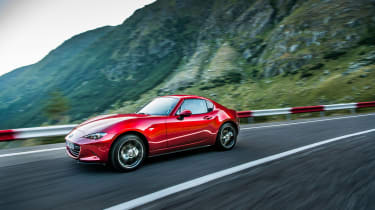 And so to Mazda’s latest coupe – that is, if you ignore assertions the CX-30 crossover fits the description. In reality, even the MX-5 RF isn’t a traditional coupe, as its buttressed roof isn’t fixed but actually a glorified tonneau cover for the central, removable roof panel.

It’s as close as most of us are likely to get to a true fixed-roof MX-5 though, and in profile the RF does a pretty good impression of a sleek coupe. The mechanism is clever too, and adds admirably little mass to the MX-5’s lithe kerb weight. The benefit isn’t just styling, but security the soft-top can’t offer, and even a touch more refinement on the move.