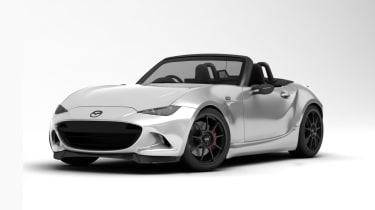 BBR will apply its considerable expertise to the fourth-generation Mazda MX-5 when it arrives in the UK this summer, with these early depictions released to whet our appetites.

With no physical car to work on, the tuner has given itself a head start by revising the 2-litre SkyActive engine inside a Mazda 3 hatch ­– the same one that will be offered in the MX-5.

So far 200bhp has been massaged from its four cylinders using the camshaft and exhaust manifold modifications last seen on BBR’s MX-5 ‘Super 200’ package. Priced at £2195, this upgrade was and remains tempting next to the official Mazda-sanctioned MX-5 GT that was tuned by Jota and cost a heady £6,900 premium (albeit with adjustable Öhlins suspension). 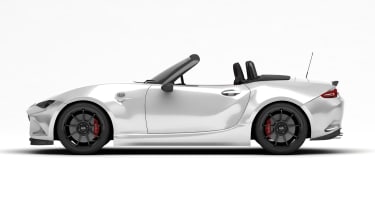 BBR will offer several versions of the new MX-5, and once its engineers have outsmarted the SkyActiv’s sophisticated ECU encryption the door will be open for forced induction. Supercharging is preferred to turbocharging because of the engine’s high compression ratio, which means it won’t take high torque levels at low engine speeds.

BBR says it is ultimately aiming for at least 250bhp from the upcoming MX-5, something that bodes very well for drivers in light of the new car’s 100kg weight saving over the outgoing model and 50:50 weight distribution. 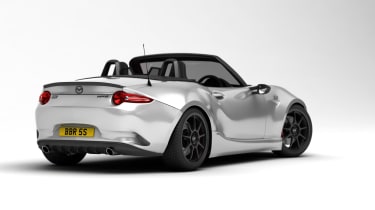 BBR has in the past been sparing with bodywork modifications, but the concept car pictured features a deeper front spoiler and sills than standard as well as a dainty bootlid spoiler (below which is the daintiest diffuser that ever was). With existing customers requesting only ‘subtle bodywork alterations’, however, any further aerodynamic changes will be slight.

evo Magazine readers will be familiar with BBR. The Brackley outfit’s MX-5 GT270 acquitted itself well against everything from Porsche’s 911 GT3 to the Ariel Atom 3.5R at our recent Track Car of the Year contest, and at £29,995 the 268bhp roadster represents tantalisingly good value for money. Less expensively, the Super 180 also went down well when we reviewed it in 2013.