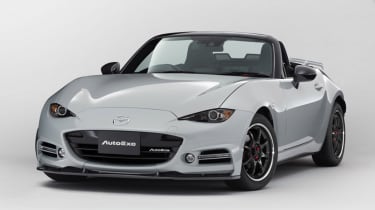 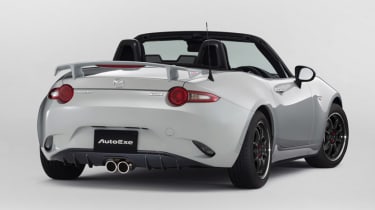 For the chassis itself, AutoExe has created front and rear anti-roll bars, complete with adjustable links. A front strut-brace and floor cross bar can also be fitted, while the fitment of a member brace set (which increases structural rigidity between all four corners) should substantially stiffen up the bodyshell.

To help the MX-5’s 130bhp four-cylinder 1.5-litre engine breathe more freely, a new intake air filter and a centre exit exhaust are also provided. The exhaust will only fit if buyers switch the car’s standard rear bumper for AutoExe’s part, which features cut-outs for the tailpipes to poke through. 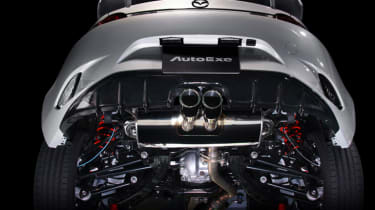 MX-5s on sale in the UK (and Europe) also have a 158bhp four-cylinder 2-litre engine option (the US gets this engine exclusively), but since this unit isn’t on offer in the car’s domestic market, AutoExe doesn’t provide any modifications for it. But UK buyers won’t be left unaccounted for – British tuning firm BBR has already announced it’ll offer a 200bhp upgrade.

Also on the AutoExe parts list is a rear wing, front-splitter and chrome-lipped alloys, though we suspect most UK customers will steer clear of these as they arguably detract from the car’s classic look. 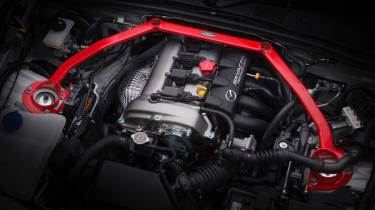 Body mods aside, our drive in the new MX-5 confirmed that despite being a sweetly balanced, responsive machine, those who enjoy driving at ten-tenths would be left wanting ‘tauter body control, more precision on the way in to the apex and flatter responses in direction changes’.

AutoExe’s range of chassis stiffening parts certainly appear to address these issues, suggesting an MX-5 equipped with its full list of performance mods would be a much better match for the likes of the Toyota GT86. Just imagine what it’d be like with BBR’s 200bhp engine mods, too…