The latest of many MX-5 special editions features contrasting paint schemes and extra kit, but no mechanical alterations

The Mazda MX-5 has a capacity for special edition models rivaled only by 1980s-1990s-era Austin Minis, and the latest is set to debut at this year’s Goodwood Festival of Speed.

Dubbed the MX-5 Icon – a name used before on special-edition MX-5s in 2000, 2005 and 2007 – it features contrasting colour schemes and extra equipment, and only 600 examples will be made, making it the rarest Icon model yet.

Only one engine is available, Mazda’s 129bhp 1.5-litre SkyActiv four-pot – good for 0-62mph in 8.3sec and 127mph – while the Icon specification is based on that of the SE-L Nav models.

That brings the price of a regular SE-L Nav from £19,845 to £20,995, which seems like a bit of a step but should attract buyers regardless and it’s available to order now.

If Mazda could just bring us a proper mechanically-altered special edition though – like the track-ready NR-A offered to Japanese buyers, with its Bilstein dampers, braced bodyshell and Mazdaspeed seats, that would really be something to look forward to. 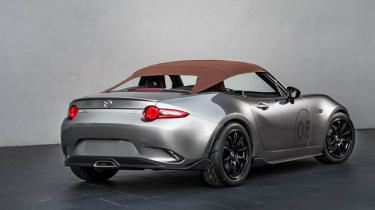 Goodwood will be home to some more exciting Mazda models however, with the first European appearance of the Speedster and Spyder concept cars – the former a roofless take on the current car and the latter (pictured) a retro roadster with a bikini-style canvas roof. The millionth MX-5 produced will also be on display.

Mazda has also announced that UK pre-order books have opened for the MX-5 Retractable Fastback announced earlier this year at the New York auto show. It too will be making its UK debut at the Festival of Speed.