Thankfully not all early MX-5s are this expensive just yet, but few are quite as tidy either 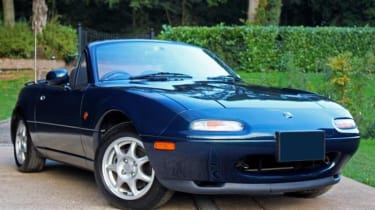 We know what you’re thinking: When did Mazda MX-5s start commanding numbers like that?

In truth, they haven’t. We don’t disagree that this example for sale in Buckinghamshire on Classic & Performance Car is about as clean as an early MX-5 comes, but it’s not our job to justify such a price when you can buy a brand-new 1.5-litre MX-5 with greater performance than any standard early car right off a Mazda forecourt. A grand more than this car is advertised for would get you the latest Icon special edition being revealed at Goodwood.

But it is indicative of the increased value being placed upon classic vehicles or, if you’ve not quite accepted the first-gen MX-5 as a classic yet, cars that will one day join that market.

And it isn’t without good reason. We’ve seen prices rise consistently for years now, and it’s having a knock-on effect at every stage in the market. As one car sets an auction record - an old 911, for instance - then buyers further down the market see other 911s as a solid investment and values of those strengthen too.

But at evo we’re not too interested in the wax and wane of the markets - though it does make some fantastic driver’s cars less accessible than they once were. For us, the value of older performance cars is the way they drive, and while you’d not rank an early MX-5 up there with a 2.7-litre Carrera RS, it’s more than capable of holding its own with its modern equivalent.

Take the car’s ethos: Mazda should be applauded for making its latest MX-5 nearly as light as the original, and for continuing to offer handling characteristics that are fun and accessible to a wide range of drivers (even if they’re not quite sharp enough for our tastes). 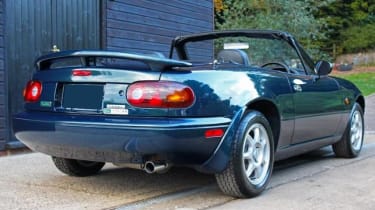 But that started with the original car, and early MX-5s arguably feel less contrived than the latest car - the performance, handling, braking, grip and body roll all feel in balance with one another, where the body roll of the new car sometimes feels excessive given the higher grip and pointier steering.

And a nice example of the original - as this car undoubtedly is - also flows down the road far better than the slightly firm new car. The tyre sidewalls have a little more give, the hydraulically-assisted steering is more consistent and feeds back more information, and the gearshift is if anything even more tactile.

This particular car, a Eunos Roadster S-Special - one of dozens of Japanese limited editions - is probably about as sweet as early cars get. Standard S-Spec kit included Bilstein dampers, anti-roll bars and a limited-slip differential.

They also originally included a set of 15-inch BBS RZ alloy wheels, though those appear to have been changed at some stage for some OEM 14-inch alloys, while all later MX-5s came with the 1.8-litre engine and additional chassis bracing. With 3000 miles on the clock though, this car probably won’t be quite as wobbly as the typical example for sale or our earlier, higher-mileage Fast Fleet example.

Of course, the best thing of all about early MX-5s is that most don’t command the £19,995 price tag you see here. What you get might not be quite as pristine (check for rust!), but there are still few better ways to get low-cost driving thrills than a few grand’s worth of MX-5.

> Find Mazda MX-5s for sale on Classic and Performance Car