Pair of concepts feature inspiration from the Global Cup car, with low weight and uprated suspension 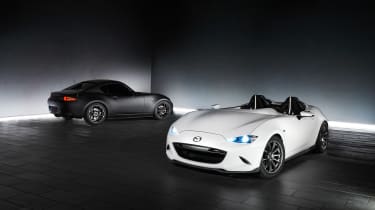 Both the MX-5 Miata Speedster Evolution and MX-5 Miata RF Kuro are based on the production car - the soft-top and RF ‘retractable fastback’ models respectively, but each features a range of small changes influenced by the race-prepared MX-5 Global Cup car.

Most intriguing is the Speedster Evolution, which as the name suggests is a development of the Speedster concept that debuted at SEMA in 2015 and has since been seen at the Goodwood Festival of Speed.

The original car cut around 113kg from the weight of the standard production car (which weighs 1075kg in 2-litre form) but the Evolution sheds more than 45kg more, leaving the final car little more than 900kg in weight.

Now a racy white rather than the original car’s dark turquoise, the Speedster Evolution keeps the original Speedster’s vestigial aero screen and twin humps behind the cockpit. The extra weight was saved by cutting away more of the dashboard and replacing the traditional dials with a digital display. 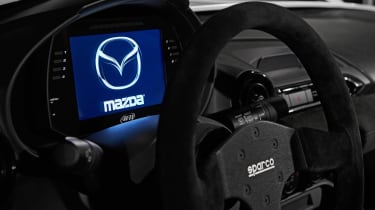 Weight was saved on the brakes too, replacing the concept's Brembo discs and pads with conventional MX-5 ones - a step that seems somewhat retrogressive, but big brakes aren't as necessary on a lighter car - and the 11.3kg standard battery was replaced with a 2kg lithium alternative.

The RF Kuro is more conventional on the outside, based heavily on the regular MX-5 RF production car whose production got underway recently. Its semi-matte metallic paintwork inspires the name - which means “black” in Japanese - and the car sits on a set of 17x7.5in Rays forged alloy wheels.

Like the Speedster, these are wrapped in 215/45 R17 BFGoodrich Rival G-Force tyres, whose motions are controlled by adjustable suspension identical to that of the Global Cup cars. Brembo brakes are used, and a centre-exit exhaust saves about half a kilo and adds around 6-7bhp.

The 2016 SEMA show takes place at the Las Vegas Convention Center in Las Vegas, from November 1-4.