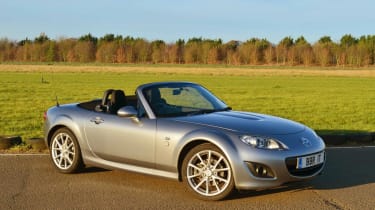 The third-generation Mazda MX-5 1.8 was something of an underdog even before the new fourth-generation MX-5 came along with better looks and a lighter chassis.

Now, Brackley-based BBR has extended its tuning expertise to the less powerful of the “NC” MX-5s with a new Super 175 package.

Alterations follow a similar theme to that of both the newer MX-5s and BBR’s existing Super 200 package for the third-generation 2-litre cars.

Pleasingly, it’s almost all “old-school” tuning methods owing to the car’s naturally-aspirated engine. It starts with a pair of camshafts with different timing and lift profiles to the standard car, helping increase both the spread of power and the peak output. Breathing is further enhanced with a new panel air filter and a 4-into-1 tubular exhaust manifold, while an ECU upgrade manages the alterations wrought by the physical changes. 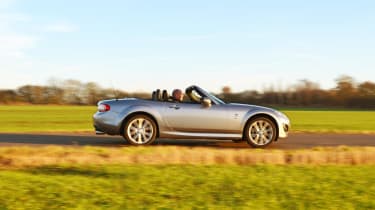 The standard exhaust system has been retained to the benefit of long-distance comfort and subtlety, but a pair of tailpipe trims allow it to stand out a little more than the regular car, while a small spoiler and BBR badging are equally low-key.

Pricing starts at £1914 (including VAT) if you’re prepared to fit everything yourself, or £2394 for a drive-in drive-out installation. BBR can also offer chassis upgrades for those wishing for a sharper drive as well as more performance.

Best of all, it’s possible to find early 1.8-litre MX-5s for as little as £3000 in the classifieds, so a tidy one of those would make a great basis for a fairly rapid, inexpensive sports car.