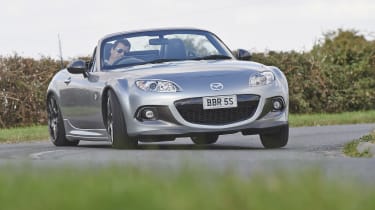 As its name suggests, the Super 200 lifts the 2-litre car’s output from 158bhp to 200bhp, delivered at 7450rpm. Actually it’s 201bhp, but that wouldn’t make for quite such a snappy name. There’s an equally useful gain of 27lb ft, elevating peak torque to 166lb ft but lowering the revs at which it arrives – 4000rpm instead of 5000. It all promises to make the MX-5 feel more urgent more of the time.

The improvements come from a blend of old-school tuning – air filter, exhaust manifold and a re-profiled cams – together with a bespoke remap. At £2634 fitted it comes at a price, but a not unreasonable one given the gains and work involved. This demo car also features BBR’s 2.5in manifold-back sports exhaust. Fitted with an integrated sports catalyst it gains a further 6bhp and 5lb ft and costs £745. BBR’s suspension, wheel and tyre upgrades complete the package, but they also come separately.

The result is an MX-5 that looks, sounds, handles and goes like it means it. The stance is so right without looking too extreme, the soundtrack pleasingly fwarp-y without being offensive or fatiguing. The ride is firm, but there’s compliance and control that gives you a much greater feeling of connection. Most importantly the handling is sharper and more precise, but more entertaining, too. There’s strong grip, but it’s naturally malleable so you don’t need to do crazy things to provoke the little Mazda into doing what a small rear-drive sports car should, nor do you need lightning reactions to catch it.

If you’re used to the torque-rich delivery of modern turbocharged cars then this MX-5 will feel like hard work, but give it time and not only will you come to appreciate that this engine requires effort to get the best from, but you’ll also revel in the performance it delivers when you dig a little deeper into its rev range. There’s useful mid-range performance, but it’s the final 2000rpm where it really fizzes with energy.

There’s tremendous fun to be had from winding it out through the intermediate gears, then carrying plenty of speed through the corners. Driven with commitment it’s a genuinely rapid machine, and because it has that bit more aggression and attitude it feels totally at ease with being pushed hard, rather than slightly flat and reluctant as the standard car does.

With the current MX-5 on its way out, Mazda has slimmed down the range such that the 2.0-litre is only available as the folding roofed Roadster Coupe, at £23,095. That’s more than the £22,495 Subaru BRZ as it is, before you even think of adding the BBR package.

When you do, the MX-5 is more than a match performance-wise for the Subaru and its Toyota GT 86 twin, though pricing then creeps perilously close to the brawny £27,435 Nissan 370Z. What none of those Japanese rivals currently offer is a convertible top, and none yet give you the option, as the MX-5 does, of picking up five grand’s worth of used example and applying BBR’s tuning work to that instead…

As ever with BBR’s work, you can elect to have things done piecemeal, or as one package. BBR’s Neil McKay knows the MX-5 inside out, so it’s no surprise this car feels completely cohesive. The engine is the star, but I’d struggle to leave out any piece of the puzzle. The wheels and tyres do so much for the looks, the suspension completes the stance and transforms the dynamics, the exhaust adds some aural attitude and the engine brings the MX-5 to life.

Combined they turn a soft-edged and rather effeminate car into a credible sports car with the point-to-point pace of a serious hot hatch, but with the welcome purity and satisfaction of rear-wheel drive. Park your prejudice and BBR’s Super 200 is an absolute belter.