Quicker than the standard car, but BBR’s latest MX-5 focuses on experience more than performance, and is all the better for it 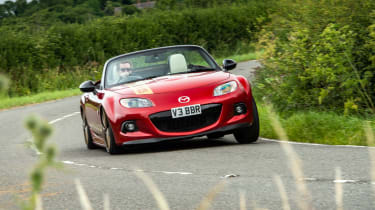 Brackley-based BBR is best known for its work on turbocharging Mazda’s evergreen roadster, the MX-5, but in recent years it’s also put a lot of development time into ways of enhancing the standard naturally aspirated package, such as the Mk4-based Super 220 we tested in 2019.

Its latest tuning package, the Super 225, is based on the third-generation MX-5, and takes things one step further, tackling one of the most important aspects of naturally aspirated tuning – intake efficiency – with a set of individual throttle bodies, often referred to as ITBs.

With ITBs often the go-to with resto-mod builds for their crisp response and old-school sound, the Super 225 package has the potential to give the MX-5 not just a boost in performance but also that all-important intangible quality: character.

Available for both Mazda’s 1.8 and 2-litre ‘MZR’-engined MX-5s (with five- and six-speed manual gearboxes respectively), BBR lays the groundwork in much the same way to that of its existing tuning packages, with a four-into-one stainless steel exhaust manifold and an exhaust back-box, as well as high-performance intake and exhaust camshafts.

The ITBs themselves comprise a set of 45mm DCOE throttle bodies with curved, CNC-machined alloy inlet pipes, a bespoke BBR backing plate and custom manifold air pressure rail, and an optional (but strongly advised) foam air filter. The curved pipes help squeeze the set-up under the standard bonnet with no modifications, and while BBR’s demo car isn’t currently wearing the factory strut brace, the configuration apparently allows for its fitment. 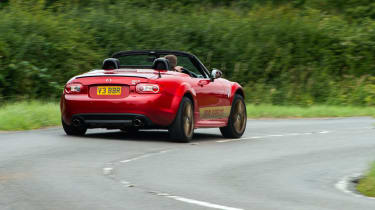 It’s controlled by a recalibrated EcuTek ECU, which works with the factory electronic throttle, standard CANbus electronic controls and Denso engine management system. This not only ensures everything can be easily returned to standard if required, but also retains the factory failsafes, so the MX-5’s reputation for reliability is unlikely to be tarnished despite the extra performance.

Power and torque are now 224bhp at 7550rpm and 174lb ft at 7450rpm, increases of 66bhp and 35lb ft respectively compared to the output of a Mk3.5 2-litre. There’s at least 150lb ft on tap all the way from 3000rpm to the 7800rpm limiter too, so it shouldn’t need thrashing just to make progress. No performance figures are quoted, but we’d be surprised if it didn’t dip well under seven seconds to 62mph, and crest the standard 135mph top end in 2-litre form.

BBR hasn’t done a great deal to the chassis of its demo car, but what it has changed is worthwhile, fitting £995’s worth of lowering springs and Koni Sport dampers, with 17x7.5 Sparco DRS wheels wrapped in 215/45/17 Goodyear F1 Asymmetric 3 rubber.

Brake upgrades include EBC yellow pads and grooved discs, stainless lines, and high-performance dot 5.1 fluid. Beyond this, it’s much the same as any other third-gen MX-5 that you can go out and buy for as little as a couple of grand in pre-facelift form, or £6k-£7k for the facelift models. 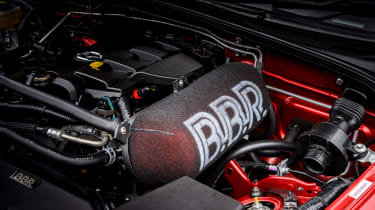 There’s still some development to do, mostly with low engine speed behaviour, but early miles in the Super 225 otherwise pass by with little more effort than in a standard MX-5. The engine pulls cleanly from low revs and relatively small throttle openings, and while initially the exhaust is more vocal than the pipework under the bonnet, noise settles down at a cruise.

With evo’s local roads stretching out ahead, it’s time to use a few more revs. Fresh from the hushed confines of modern cars the sound levels are a shock to the system at first. The twin-exit exhaust is most notable initially, with a hard-edged snap even on a light throttle that overpowers the snort of the ITBs up front, but roll into it a little harder and there’s soon a cacophony from both ends, growling induction noises competing with the rush of gases exiting out the back.

That initial tip-in isn’t as sharp as you’d get from the high-compression Skyactiv engine in the current MX-5, but where the ITBs shine is that every extra squeeze of throttle travel seems to have a proportional effect up front. A lot of modern performance cars give you a kick in the kidneys in the first half of the pedal’s travel then ease off afterwards, but the Super 225 encourages you to go wide open as much as possible. 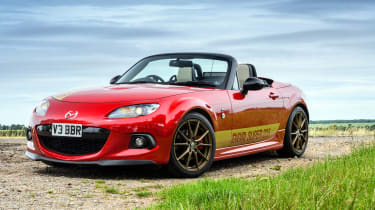 With a raised rev limit the standard gearing can actually feel a little long, but it means second and third are perfect B-road gears. You’ll get to enjoy the extra thrust in second more often just because of the extra revs available when changing down, and the satisfaction of that carb-like snort with each blip of the throttle. Even with 224bhp it’s not wildly fast (modern turbocharged cars really have spoiled us), but it feels fast, which is kind of the point of cars like this, isn’t it?

MX-5s have always been about carrying speed anyway, and here’s where BBR’s demo car really scores. Despite only fairly basic upgrades, this is a seriously sweet chassis, whose movements are more in tune with the car’s balance and grip levels than on the latest MX-5. The steering gives you more information, and roll builds proportionally to adhesion, which is great for driver confidence and even better for the way the Super 225 flows along a road.

There’s just a touch of understeer on turn-in but then beautiful balance through the rest of the corner, and enough power under your right foot to exploit it. When you do finally need to brake, the upgrades on this car give tireless performance in a relatively light chassis like this, and offer great feedback through the pedal too.

A few caveats do still apply: after a day in the Super 225 the bombardment of noise did begin to get a little tiring, and economy in the low 20s is the hidden side effect of forcing all that extra air and fuel into the cylinders. As a driving machine though it’s hard to fault, turning an affordable roadster into a kind of budget Boxster Spyder. 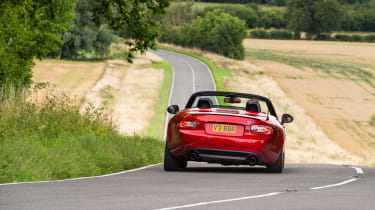 BBR’s engine work comes in at £5154 including VAT fully fitted (or £4194 for the DIY option). While that’s a lot for a power upgrade in the world of easily chipped turbocharged engines, it still looks cost-effective given the value of Mk3 MX-5s right now.

If you’ve been reading evo for a while you might remember that early models had some iffy handling characteristics, but the Mk3.5 facelift cars, like BBR’s demo car, were much improved, and can now be found for under £7000. Throw in suspension, wheels and tyres and you’re looking at under £15k all in, which doesn’t sound bad at all – comparable with used Mk4 MX-5s, Toyota GT86s, and 987-generation Boxsters.