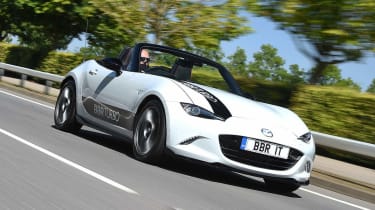 Northamptonshire-based MX-5 tuner, BBR, has turbocharged the latest generation of Mazda’s small sports car taking its power to 248bhp. This new conversion is for the 2-litre model and cuts the car’s 0-62mph time from 7.3sec down to just 5sec. The package costs £4995 or, should you wish to fit it yourself, £4395.

> Read our review of the Mazda MX-5

Of course, BBR doesn’t bolt any old turbocharger to the MX-5 just to gain a chunk of extra power; the conversion is much more in-depth than that.

To begin with, the turbocharger itself is a twin-scroll unit, chosen over a supercharger and single-scroll unit because its low back pressure is suited to the MX-5’s high compression ratio Skyactiv engine. The turbocharger then mounts onto BBR’s specifically designed cast-iron exhaust manifold. 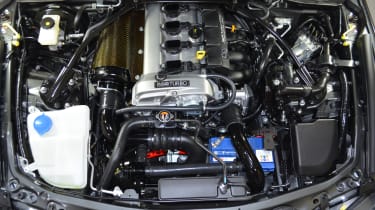 A new ignition and fuel map to suit the more powerful engine is then controlled by BBR’s Starchip/ECuTeK RaceRom software, with the turbo’s boost set to 7psi. To further improve the turbocharger’s efficiency, BBR has added an air-to-air intercooler to reduce the charge air temperatures.

To make space for the new hardware the battery is repositioned within the engine bay; the tray that it sits on it has been finished in the same colour as the new boost pipes and hoses. 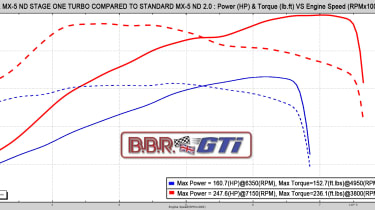 BBR refers to this new conversion as Stage 1, and says there will be more to come in the future. ‘With internal upgrades to the Mazda engine we know that considerable extra power is available – the BBR technical team is already developing future stages to exploit this', explains BBR's Neil McKay.

BBR has been tuning MX-5s for many years and has modified every version since the first generation NA. The firm was even trusted by Mazda itself, as it was called upon to boost the engine in the official MX-5 Le Mans edition from 1991.

This is the first time BBR has turbocharged the ND MX-5, having previously focused on extracting more power while keeping the motor naturally aspirated. BBR achieves an additional 45bhp from the atmospheric engine by changing the intake system, the cams and valve springs, replacing the exhausts with a stainless steel manifold and remapping the ECU.