TechArt 718 Boxster S review - What does 394bhp in a Porsche Boxster feel like? 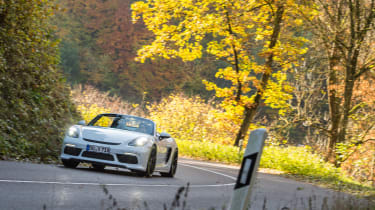 Porsche’s decision to swap the Boxster’s naturally aspirated flat-six for a turbocharged flat-four may have resulted in abject disappointment from those who appreciate good acoustics, but there’s been elation from those who tweak the cars.

Eking out extra power from a highly strung naturally aspirated engine is an involved and expensive process, and the gains are quite meagre compared with the effort required.

However, a turbocharged engine can be made to churn out extra power with relative ease, and if you know what you are doing, it can do so reliably, too. And that’s where German tuner TechArt come in with its 718 Boxster S.

> Read our review of the standard Porsche 718 Boxster S 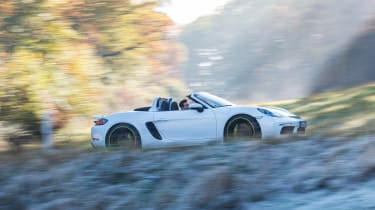 Still, despite knowing the sort of power that can be extracted from modern turbocharged engines it’s no less surprising to see a Boxster with damned near 400bhp. TechArt has taken the 2.5-litre engine in the 718 Boxster S and increasing its power from 345bhp to 394bhp and torque from 310lb ft to 354lb ft.

The extra power means its 718 is good for a claimed 0-62mph time of 4.0sec with PDK and Launch Control – two tenths quicker than the standard car – plus a top speed of 184mph (up 7mph).

TechArt doesn’t delve into the 718’s existing ECU and make irreversible changes. Instead, its ‘Techtronic’ engine management sits alongside the OEM system, making it easy to install and just as easy to remove. This approach means the upgrade doesn’t affect the vehicle diagnostics or built-in engine-protection systems.

Even so, TechArt takes over the warranty for the engine and gearbox.

To help liberate the extra power, a new exhaust has also been developed. Rather than being a full titanium system like those it makes for 911s, only the tips are titanium (and carbonfibre) here. The rest is stainless steel to keep costs down and more appropriate to the Boxster’s price. 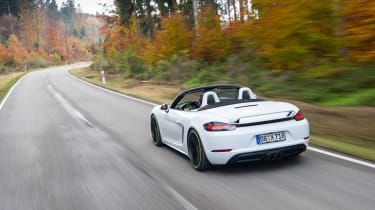 TechArt also offer some tweaks to the chassis to so the 718 has a better chance of coping with the extra power. The car sits 35mm lower than a standard Boxster, or 25mm lower than one with PASM, thanks to new springs, however the dampers remain unchanged. The wheels have also been replaced with a set of TechArt’s own 21-inch rims.

The ride height and wheels combined with a few body changes – the standard retractable rear spoiler has been replaced by a fixed wing, while at the front there’s a two-part splitter and a GT3-style vent at the base of the bonnet – add a degree of menace that’s missing from the standard Boxster.

Despite the lower, stiffer springs and louder exhaust, this Boxster isn’t really any less civilised. The suspension is firmer and the ride slightly busier, but the car retains enough suspension travel to remain composed on rough roads.

The noise from the exhaust isn’t dramatically different, either. The sound is still the familiar thrumming of the 718’s flat-four, only now an octave lower rather than being much louder. That deeper tone and the firmer ride, although subtle, infuse the Boxster with a more determined focus even before you’ve felt the extra power.

Not that the additional shove is immediately obvious. The module that liberates the extra power doesn’t come into effect until you select Sport or Sport Plus mode, so by default the car has exactly same power as when it left the factory. However, when you do finally choose a mode that gives you the full monty, there still isn’t the Jekyll-and-Hyde transformation you might have been hoping for.

This flat-four isn’t the most linear of engines and the upgrade hasn’t changed that. But where the standard engine pushes the Boxster S forwards determinedly, as it passes 4000rpm this 718 begins to fire you forward.

> Read our review of the Porsche 718 Cayman

Impressively given the big hike in power, the car deals with the more pronounced boost without the traction control going beserk or the rear wheels losing traction; 394bhp in a Boxster doesn’t feel wild or over the top, it feels completely appropriate.

But don’t go thinking it’s boring. TechArt’s 718 is properly fast, and the acceleration is now distracting enough to make you forget about the less-than-ideal noise from the engine.

The lower, firmer springs may have added a slight edge to the Boxster’s fluid handling, but they haven’t affected the car’s balance. It still changes direction beautifully, pivoting around its centre. The springs tighten up the chassis slightly, too, and help the steering response feel more immediate.

However, in tighter corners where you really load up the outside tyres, there’s a little more roll than you might expect – though no more than in a standard Boxster. As the body rolls, the inside rear wheel also spins easily thanks to the extra torque and lack of a limited-slip differential (there’s one on Porsche’s options list, mind, at £890, including torque vectoring). Also absent here are Porsche’s carbon-ceramic brakes, but the standard cast-iron items are perfectly capable of hauling the car to a stop.

Although you don’t have to fit the entire TechArt package, you could choose to just have the extra power, the combination of all these modifications elevates this 718 Boxster into a league above the standard car. Even though it hasn’t dramatically improved the new engine’s sound, the exhaust’s bassier notes are more tuneful, while the new wing and splitter give the mid-engined Porsche a real presence. Finally, the unruffled way that the car copes with the extra 49bhp and 44lb ft of torque secures the 718 Boxster’s position as a proper sports car – and one of the best available.

Just make sure the car you start with has a limited-slip diff. 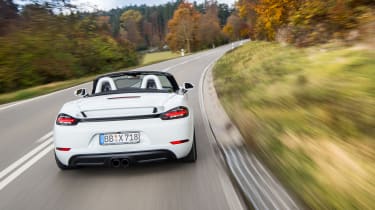 The power upgrade and exhaust come to a hefty €7664 (c£6500). But, as our test car demonstrates, you can spend a whole lot more. The interior modifications – including new Alcantara and leather interior with contrast stitching, embroidered TechArt logos, carbonfibre seat backs, a recovered and re-profiled steering wheel, leather covered gear selector paddles and anodized aluminum pedals – costs a total of €22,283 (c£19010). However, even TechArt don’t think many of its customers will opt for the full complement of its alterations, this car is just an example of what is possible.

At this price the tuned 718 is still cheaper than the Porsche 911 Cabriolet, but it does mean it goes up against Jaguar’s 375bhp V6 F-type. The Boxster not only has more power, but it’s a more delicate and nimble car than the Jag.

> Read our review of the Jaguar F-type