In many ways the best 718 Boxster to drive, but that sadly doesn’t paper over the inadequacies of the flat-four engine 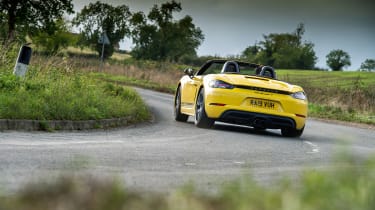 The modern incarnation of the T model line was first seen towards the end of the 991’s lifetime, denoting an entry-level Porsche that offered a more focused sporting intent without resorting to fundamentally different engineering solutions. The same treatment has now been applied to the current 718 Boxster (and Cayman). Can it make us think differently about the overall 718 offering?

True to the concept, the T is only available with the lowest-powered engine in the 718 range: the 2-litre turbocharged flat-four unit that produces 296bhp and 280lb ft of torque, the latter available from just 2150rpm all the way to 4500rpm.

As usual, there’s a choice of two gearboxes: a slick-shifting six-speed manual, or Porsche’s excellent seven-speed twin-clutch (PDK) box. As you might expect, the T is quicker with the PDK option, with the 0-60mph sprint as low as 4.5sec in Sport Plus mode, while Porsche quotes 4.9sec for the manual. 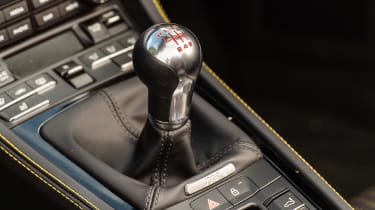 The mechanical elements in the T recipe are nothing that Boxster buyers won’t have been able to purchase before. Rather, the appeal of the T is in combining the most driver-focused options together and then applying them to the entry-level 2-litre model – hitherto impossible with some of those parts, such as the sports suspension set-up. This lower (-20mm) and firmer chassis features Porsche’s electronically controlled variable dampers (PASM), and is combined in the T with the firm’s active engine mounts and a torque vectoring system that works with a mechanical limited-slip differential. The 20-inch alloy wheels are also standard T equipment.

Inside and out, the T can be identified by a host of fairly subtle details that distinguish it from the regular Boxster models, such as grey door mirror caps and logos on the doors, while inside half-leather seats feature ‘Sport-Tex’ fabric centres and there are 718 T graphics on the headrests. The door handles have been replaced by fabric door pulls, saving a few grams, and a standard T from the factory comes with no infotainment system whatsoever; you’ll need to pay extra to upgrade from just a central cubby hole. It’s a nod to the purists, but given the percentage weight gain in light of the Boxster’s overall weight, perhaps a slightly cynical one. 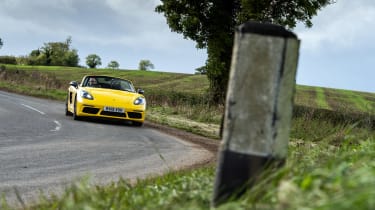 When Porsche moved from 981 Boxster to 781, by just about every measure it made a great car even better. The 718 T is the kind of car that appeals to drivers whether they’re novices or experts, whether driving slowly or working it right up to the limit. It’s faithful and friendly, but rewards precision and confidence, and yet it can be no more taxing to commute in than any sort of ‘normal’ car. The steering is accurate, perfectly weighted and provides plenty of feedback, and grip levels are very high. In the dry, you’ll be doing well to get anywhere near exceeding what the T has to offer. From prior experience on a track, when those limits are exceeded in the 718 there’s a car of beautiful balance to be discovered. In short, it’s very hard to be bored when behind the wheel of a 718 T.

So why are we not falling over ourselves to give the 718 T a five star review? Well, it’s the same old issue, I’m afraid, and no amount of extra equipment or sporting focus can change that. While the 718’s flat-four engine is interesting from a technical standpoint, and on paper a great idea, the execution of it simply isn’t up to Porsche’s usual high standards. Sure, it makes more than enough power, and the extra turbocharged kick lower down the rev range (compared to the old 2.7-litre NA flat-six) in some situations adds a welcome extra feistiness to the 718’s repertoire, but from the moment it cranks rather unceremoniously into life the flat-four is a disappointment. It neither sounds good nor feels smooth, and combined with long gear ratios you’re forced to hear its harsh, túneless voice more than is desirable. It lacks the throttle response and musicality of the old flat-six, and in the real world is no more frugal than it either. The PDK option alleviates the situation slightly, but it’s still worth opting for the manual anyway as it’s such a nice gearshift, and let’s face it, there aren’t many of those left these days. Take advantage while you still can. 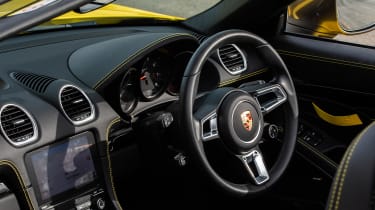 There aren’t a great number of credible rivals to the Cayman T. On the mass market there’s the BMW Z4 M40i, which not only undercuts the Boxster T in price but also offers an extra 40 horsepower and a much more satisfying engine into the deal. It’s a surprisingly capable car, but nothing like as fun to drive as the Porsche. The Lotus Elise is cheaper, quicker and even more invigorating to drive, but does require more commitment from the owner to live with.