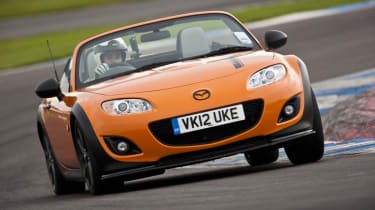 What is it? The Mazda MX-5 GT Concept is a faster, more aggressive MX-5 developed by Mazda UK with its race partner Jota Sport. It’s a concept for now but the GT Concept is in the advanced stages of a feasibility study and is very likely to go on sale soon at under £30,000 (making it an instant Toyota GT86 and Subaru BRZ rival). Each car will be hand finished at Jota’s race facility but will be covered by a full Mazda warranty. Technical highlights?Jota Sport has been right through the MX-5 and the result is a pretty tasty and cohesive package. The 2-litre engine is the real highlight, producing over 200bhp and 144lb ft (up from 158bhp and 138lb ft) through old fashioned tuning – hotter cams, throttle bodies and freer breathing induction and exhaust.

The result is a real little screamer – they say it produces peak power at 6500rpm but the engine seemed to get stronger all the way to 7500rpm. Peak torque comes in around 4800rpm and you need to row it along above 5000rpm to get the best from it. Mazda says the power and torque curves are still being fine-tuned so if the car is built it may sacrifice a little of that top end fury for better mid-range response.   Elsewhere the chassis utilises standard dampers (revalved for better control), 35mm lowered Eibach springs and the standard MX5’s anti roll bars. The brakes are also unchanged. There’s a bit of aero tweakery too, but it’s unlikely that a funky carbon splitter or venturi at the rear will make any discernable difference unless you happen to drive it over a very high cliff.  So what’s it like?

Rorty, very, very rorty. The throttle bodies snarl and gargle like a demented BDA and although it’s great fun I suspect it might be a bit noisy for most trackdays. And that would be a tragedy as the GT Concept is fluid and poised on the track – it eradicates the standard car’s easily induced understeer, ramps-up body control and yet retains that lovely, progressive arc into oversteer that is such an MX-5 trademark. In fact the more incisive turn-in and reduced body roll only make the car more adjustable. Don’t expect a big time power oversteer machine though, there just isn’t the torque. Instead you trail brake into turns to get the rear moving and then hold it there with a mix of throttle and momentum.  On the road you notice the little imperfections. The throttle bodies make the accelerator pedal very sticky initially, a trait that you can’t drive around. The ride is firm vertically but there’s still quite significant body roll. However, for the most part it’s good news. Steering feel is beefed up, performance is really strong and although it needs revs the GT Concept feels much keener than a Subaru BRZ/Toyota GT86. My only gripe is that this car will sell in tiny numbers and to the dedicated few – why not dial out that body roll, give the chassis even more bite? I think the customers would tolerate it happily.  How does it compare?

The Mazda MX-5 GT Concept is far quicker and more exciting than the standard MX-5 – building on that car’s strengths and dialling out some of the curious body control issues that effect the standard car. It’s also a heck of a lot quicker than a GT86 or BRZ and although it lacks their excellent steering precision and perhaps a shade in outright grip, I think it’s probably more fun, more often. £30,000 isn’t cheap but that noise and the carbonfibre addenda do make this car feel quite special.  Anything else I need to know?

Jota Sport has developed a GT4 version of the MX-5 with 320bhp that’s now right at the sharp end of its class in the British GT Championship. Suffice to say they know what they’re doing. Oh, you can buy the GT4 racer, too. It’s £125,000 plus local taxes.