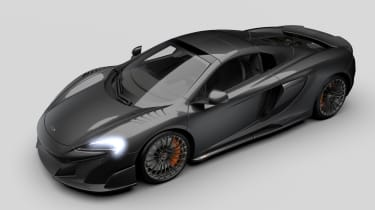 McLaren has announced an even more limited run version of the already exclusive 675 LT Spider. Called the MSO Carbon Series LT, the car will be limited to 25 units globally, all of which have already sold.

It uses the same bare carbon fibre effect seen on the McLaren P1 and features no less than 40 percent more carbon fibre body panels. New to the MSO over the standard LT is a carbon fibre retractable roof and tonneau, as well as A-pillars, bonnet and rear deck. Even the fuel filler cap is carbon.

Fitted as standard is McLaren's 'track telemetry pack', which adds three different cameras to the car so you can easily capture any driving done on track.

McLaren has said that it's not possible to retro-fit all the carbon fibre found on the MSO LT, meaning those who already own 675 LTs will be stuck with just the standard, albeit truly fantastic, road car.

If you'd like to read more about the 675 LT Spider, why not take a look at our review here. Alternatively, you can watch our 2015 evo car of the year film to see who the Coupe performed.