Just as talented as the fixed-roof 675LT, the Spider is fast, fun and involving. And already sold out... 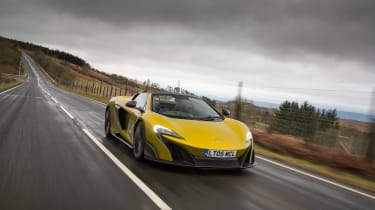 The LT (Longtail) brand is McLaren’s version of the Porsche GT cars, offering faster, more track-focused and more pared back versions of their regular cars. So, the 675LT Spider is the more hardcore iteration of the 650S Spider. The coupe iteration of the 675LT came second on eCoty 2015 (only narrowly beaten by Porsche’s Cayman GT4). The coupes were limited to a run of just 500 and initially McLaren said that there would be no other versions. However, after strong customer demand it was decided to build 500 Spiders. To mollify any 675LT coupe customers that might have been (understandably) miffed about this, McLaren offered them first refusal on the Spiders.

The Spider is mechanically identical to the 675LT coupe, save for the roof mechanism, which adds 40kg. However, the LT Spider saves 100kg compare to an equivalent 650S Spider, with 35kg saved on the body panels, mostly through the use of carbonfibre, and 30kg saved in the use of lightweight suspension components (many brought across from the P1). A further 10kg is saved in the powertrain, while 20kg and 5kg are saved in the interior and electrical systems respectively. This brings the dry weight down to an impressive 1270kg.

The aerodynamics have been optimised to give a 40 per cent increase in downforce. Most of this is obviously due to the jutting chin splitter and the 50 per cent larger air brake, which now stretches across the whole width of the car (and is much more obvious in your mirrors when it deploys). You’ll also notice the fins at the side of the nose, which are designed to smooth the airflow past the front wheels and keep it attached to the sides of the car, thereby working the bottom third of each of the radiators much harder.

In terms of the suspension, the front springs are 27 per cent stiffer and the ride height is 20mm lower, while the rear springs are 63 per cent firmer. The front and rear tracks are also 20mm wider. Over half of the engine components have also been upgraded, with more efficient turbos, lightweight con rods and detail design changes to the inlet and exhaust manifolds, to name jut a few of the alterations. The titanium exhaust is 1.1kg lighter despite being 60cm longer (the extra length is squeezed in by having the left bank of the engine crossing over to exhaust on the right hand side and vice versa). 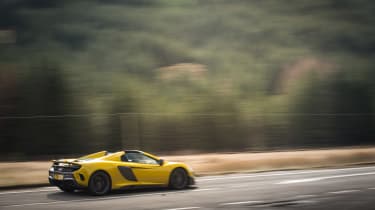 Duck under the slightly awkward door, drop over the high sill and you find yourself in a perfect driving position. You feel a long way forward in the car, but the deep bucket holds you securely and the high shoulder line makes you feel cocooned, even with the roof down. Although NVH levels are noticeably higher when you get going, the cabin doesn’t feel stark and stripped out like some road racers.

The launch was in Scotland on roads so wet that Noah’s woodwork skills would have been getting twitchy, but in many ways this only served to further highlight the huge strides that a 675LT makes over a 650S.  The sense of connection through both the steering and the seat of your pants is undoubtedly the best of any modern McLaren. The steering rack is actually slightly faster than the one found in a P1 but it doesn’t feel twitchy, it just makes the car feel alert and gives you a tremendous sense of how the front wheels are reacting and what the road surface is like. The firmer engine mounts no doubt also play a big part in this.

The ride is firm enough to hint at the LT’s track aspirations, but there is still plenty of travel and suppleness to make road driving a joy. The balance is superb, the car always encouraging you to push harder and then rewarding when you do.  When the front end breaks away it isn’t in that absolute glassy way that can make understeer so unnerving, rather it is just that grip lessens while still feeding back and giving you options. And the options certainly include oversteer. Sliding a 666bhp supercar in the wet could potentially be terrifying, but the confidence that the 675LT instils means that it is just fun. 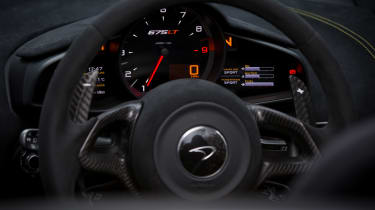 The torque delivery is interesting as well, because although the engine is capable of delivering all 516lb ft of torque from much earlier in the rev range and maintaining it in a broad plateau, the engineers have decided to give it a rising torque curve that enhances your sense of engagement with the engine as the revs climb and acceleration builds. Traction was somewhat limited in Scotland, but even with a certain amount of wheel spin management (either via your right foot or the two nicely judged ESP modes) the acceleration is very, very serious indeed.

The soundtrack is also far more thrilling than with any other road iteration of the McLaren 3.8-litre twin turbo V8 that we’ve tried. This is partly due to the new exhaust system, but it is also a product of the ignition cut that happens when the powertrain is in Sport mode. This produces a terrific CRACK on upchanges that, although engineered in, somehow avoids sounding artificial. Of course the ability to have the roof down on the Spider version of the 675LT only enhances the soundtrack and even when it’s too wet to have the whole thing folded away you can still lower the rear window to let a bit more noise in.

In short, the 675LT Spider is superb and it’s great to think that this won’t be the last LT that we see. I suspect it would take the provision of a dry track and numerous laps back to back in the coupe and Spider to even hint at the 40kg disparity between the two versions. Of course if McLaren would like to oblige…

All 500 675LT Spiders sold out within two weeks of the order books opening and with coupes currently selling for about £120,000 more than their original list price we’re not surprised. The Spider retails at £285,450 or £25,950 more than the coupe.

With no ‘Speciale’ version of the 488 or Superleggera version of the Huracan available at the moment, the 675LT is rather on its own in the class. Porsche’s significantly cheaper GT3 RS has also sold out and while an Aventador SV roadster might be tempting for the noise of its glorious naturally aspirated V12, at 1575kg it is a much heftier car. At around £350,000 its price tag is heftier too. 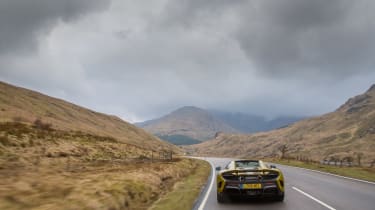 Apparently 75 per cent of the 675LT coupe allocation was modified in some way by McLaren Special Operations (MSO) and it is expected that there will be plenty of requests from the Spider owners. On the launch there was a car with a naked carbon roof, a naked carbon underside to the air brake and vents on the front arches (curiously the aero benefits of these aren’t great enough to warrant any change in set up at the rear) all executed by MSO. If you really want to add that McLaren F1 touch, you can also request 24 carat gold heat shielding in the engine bay.

The lemon gold colour of the car in the photos is called Solaris and the 20 spoke wheels are unique to the Spider. To see a rather beautifully coloured 675LT coupe complete with a few MSO alterations, check out Graham Davidson’s Instagram.