McLaren’s hardcore Super Series range is to grow with the 750LT adding power, aero and price to the basic 720S package 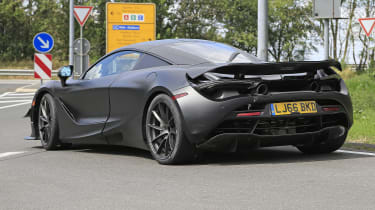 The McLaren 720S has been winning drag races and pulling big numbers on dynos for a couple of years now, meaning the time is near for it’s stripped down, hardcore derivitive. Currently expected to be called the 750LT, this even hotter 720S will follow in the same footsteps as the brilliant 675LT and 600LT before it.

As the name suggests, we suspect the 750LT will feature a slight power bump to 740bhp (the 750 is in reference to metric horsepower) from its familiar 4-litre twin-turbocharged V8 engine connected to a revised seven-speed dual-clutch transmission. The 720S’s hydraulically cross-linked Pro-Active suspension will still form the basis of the suspension layout, but with software and hardware updates that should improve on the already deeply impressive calibration.

It’s these subtle changes from McLaren’s engineers that so often turn what is a deeply talented, yet still usable and rounded supercar into an even sharper and more focused evo favourite. With a vast spread of other incremental changes brought throughout the car’s steering, driveline and aero package, LT upgrades build on a standard McLaren model’s excitement levels without too much compromise on the road.

The prototype photographed here gives little away, with only a deep splitter and rudimentary front-mounted canards really suggesting that this is the LT variant. Look more closely though, and you’ll see a very small gurney flap on the standard active rear wing. It’s as yet unconfirmed whether the production LT will have a new rear wing and bumper treatment as the 675LT did, but either way, the 750LT won’t stray far from the standard 720S aesthetically.

Expect the widespread application of carbonfibre on the 750LT’s new aero devices, and a stripped down interior with some featherweight buckets, harnesses and plenty of alcantara. Going by McLaren’s recent form on models like the 720S and 600LT, we suspect eCoty 2020 might well be one of our most dramatic yet, with the little matter of an all-new Porsche 911 GT3 in the mix too.