Still wrapped in protective film, a McLaren F1 is going up for sale with 149 miles on the clock. 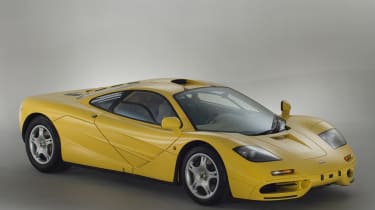 The McLaren F1 is the car that set the modern hypercar template and is hugely sought after by collectors as a result. Only 106 cars were built between 1992 and 1998 so F1s are rare in the extreme but one has just come to market that takes this rarity to another level. After two decades of ownership, unregistered, this Mclaren F1’s odometer reads just 149 miles courtesy of pre-delivery testing. To call this a used car would be somewhat crude so you could certainly look at it as an opportunity to buy a new McLaren F1.

The car is showroom fresh; the exterior protective film still intact and the interior draped in its original covers – it’s a time warp back to the McLaren factory floor in 1997. The appeal doesn’t stop there, the leather-cased owner’s handbooks, the Facom tool chest and the gold-plated tool set are a collector’s dream. A TAG Heuer watch, never worn and engraved with the chassis number (060), accompanies a full luggage set – never used as short journeys, let alone long ones have been off the agenda for this F1.

The Dandelion Yellow finish is seldom seen on the British supercar, adding to the exclusive factor. The bright hue also trims the seat in an otherwise dark grey interior, drawing your focus to the unique, central driving position.

Even before the days of MSO, McLaren was accommodating to customers’ desire for a personal touch. The build sheet for this car included: a spare Le Mans style exhaust, an additional (F1) GTR steering wheel and passenger over-carpets – all still unopened. The carbon driver’s seat, hand-painted Gordon Murray signature and quick-release, suede-clad steering wheel are special order items, too.

The golden engine bay housed the BMW Motorsport-built 6.1-litre V12. In excess of 550bhp and 443lb ft of torque was on tap as the needle swept through the tachometer to a 7500rpm redline. In the context of a dry weight of 1018kg, thanks to a carbonfibre monocoque chassis, the McLaren displayed mind-bending performance that saw one hit 242mph with Andy Wallace at the wheel. While the McLaren’s ability to mix it with today's plethora of super and hypercars is questionable, it represented the pinnacle of road-going performance for more than a decade after it debuted.

Unsurprisingly there’s no price quoted by the dealership. You’ll have to ring up and prove your financial worth before the eye-watering, likely eight-digit figure is disclosed. Whoever becomes the next custodian of this McLaren F1 will have a (first world) problem on their hands: spark the V12 into a life and get some exhilarating miles under your belt or keep it as a pristine museum piece. The car is on sale at Tom Hartley JNR. 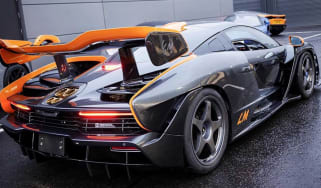