A decade ago it redefined the word supercar. There's still no other car like it 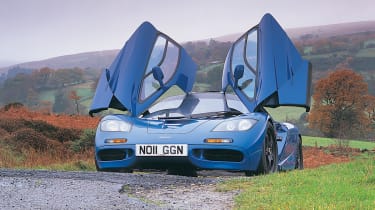 Question: which car has the better power-to-weight ratio: the Bugatti Veyron or the McLaren F1? Answer: the car with the carbon monocoque that was designed to take it into account.

The F1 might no longer be the fastest supercar ever made but it clearly remains the car that does the most with its power. The Bugatti’s 521bhp/ton is impressive but the McLaren’s 559bhp/ton is more telling, especially when you consider that the Veyron has 1000bhp at its disposal and the Macca a ‘mere’ 627bhp. So, even though the Bug has twice the torque of the Mac (479 plays 922lb ft), it’s just 12mph faster flat out and 0.8sec quicker to 100mph. Let’s look at it another way. Each of the Bugatti’s bhp delivers 0.25mph and each of the McLaren’s 0.38mph.

But then the F1’s prodigious performance was a consequence of its sublime design and engineering and not the starting point. And that’s why the F1 still delivers such a pure and exhilarating driving experience that reaches far beyond the initial hit of its fabulous acceleration. The central driving position requires effort and a certain gymnastic dexterity to access but that’s only right. This isn’t (or at least shouldn’t be) a car you leap into, fire up and fling the taps wide open. You savour the moments. All of them.