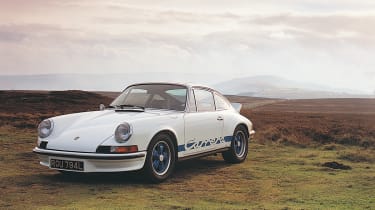 The defining 911 of its era, the Carrera 2.7 RS was created as an homologation special. All 500 examples of the initial batch were sold within a week of the car’s international debut at the 1972 Paris Show. As a design, it was an object lesson in economy of purpose. With its appropriately fat tyres and duck-tail spoiler, it made later models look fussy and clumsy. It was the first 911 to bear the RS moniker and, for many, it continues to encapsulate and project the 911 experience more cogently than any other.

Lean and hard, with no hint of the excess that blunted the edge of some subsequent models, its 2.7-litre flat six developed a solid 210bhp: enough to propel that lightweight body (under 1000kg) to 60mph in comfortably under 6 seconds.

The car still makes most modern 911s feel aloof. Drive a 2.7 RS and the nerve endings in your fingertips tingle with small but critical details. The surface of the road is etched out in digital-sharp resolution, uncorrupted by compromise damping effects. It jiggles, it kicks, it writhes – bristling with feedback. There’s so much pure feel, it’s still difficult to think of any other car that’s as satisfying to drive hard. Or, indeed, another engine that takes such complete control of the small hairs on the back of your neck.

Share this on TwitterShare this on FacebookEmail
Go Back to7. Porsche 997 GT3
Continue Reading9. Honda Integra Type-R