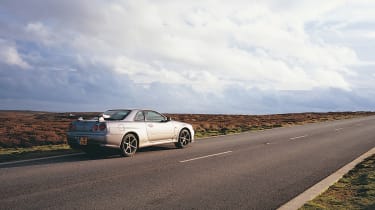 What we loved about the Skyline R34, the thing that set it apart from other Japanese rocket-sleds (apart from its butch, angular appearance – if a car could grow stubble…) was that it owned one of the most technically sophisticated and absurdly talented four-wheel- drive/steer chassis ever to cling to a twisty road. Never mind that it was called ATTESA E-TS Pro, what mattered was that it put all the drive through the rear wheels until the road conditions dictated that some torque should be directed to the front.

It sounds like a blast and it is. At first, though, it’s unnerving. The R34 has an entirely different feel to a Scooby or an Evo. It feels like an altogether tougher, bigger, heavier car. And those SUPER HICAS four-wheel steering responses appear to be artificially darty. At the same time, other aspects of the package feel curiously old-fashioned: hard-riding, slow-revving, conspicuously turbocharged. But then much of the high-tech hardware is designed to make it feel old-tech simple and honest. The only real disappointment was the rather tacky interior. A warrior-class performer nonetheless with a compelling mixture of raw stonk and PlayStation-esque all-drive chassis wizardry.