Ferrari's riposte to the Porsche 959 stands the test of time, and is the only Maranello product in the top 10 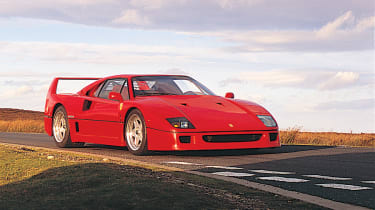 Is the F40 the greatest road- going Ferrari of them all? Arguably, it’s the most exciting, focused and rewarding. It’s also the most fabulously functional, shorn of everything that doesn’t add to its speed or dynamic acuity. It gives the notion that ‘less is more’ new impetus. But that’s what makes it so enduringly desirable. The lean provisions, the absence of veneer, the hardcore conviction of it all.

Ferrari threw together the F40 in 12 months. Officially, it was to commemorate its 40th birthday, but everyone knew it was really revenge for Porsche’s audacious act of one-upmanship in making the 959. Ferrari’s counter punch could have been shoddy and unresolved – all power and no purpose. But the (comparative) speed and passion with which it was created and constructed worked powerfully to the F40’s advantage.

Powered by a twin-turbo 2.9-litre V8 developing 478bhp, the 1100kg F40 can just about crack 200mph but, with the supercar high end now defined by the Veyron, its acceleration stats no longer seem so special. It doesn’t matter; the F40’s manic delivery makes it fast in a way even drivers of a modern supercar hero such as the Murciélago won’t understand. Supercar motoring comes no more intense than this.

Find used Ferrari F40's for sale on the Classic and Performance site here.