Not really a car in the sense of anything else here. Better described as a brief taste of omnipotence 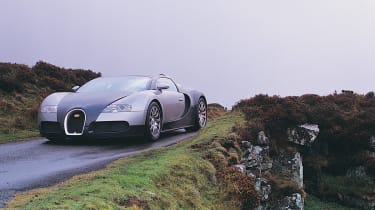 To understand the Veyron you have to experience it. Like some frighteningly abstract cosmological concept, you struggle to get a handle on its capabilities, trying to imagine what accelerating to 100mph in 5.5 seconds or travelling at 250mph might actually feel like.

But here’s a clue for anyone who’s ever felt the sledgehammer thump of Mercedes’ 500bhp SL55 AMG. The Veyron weighs about the same but is twice as powerful. It has almost twice the torque, too. And it feels roughly twice as fast. That’s twice as fast as the fastest car you’d ever need. A Veyron will dust an Enzo without trying.

Then again, there is a whiff of the absurd about the Veyron. It has as many turbochargers as it has driven wheels (four apiece), two clutches, a seven-speed gearbox and 1000bhp. It gets to 60mph in the time it takes its driver to gulp. It’s about as sensible as a body-builder’s 21-inch neck. Veyron drivers who flex their right ankles too enthusiastically may well end up with the same.

But my guess is no Veyron will ever be driven at 250mph by its owner. What matters is the psychology of wielding such colossal potential. The Veyron’s top speed is so high, no one needs to go there. The advantage is all in the mind. And that’s probably the greatest power of all.