The early 90s legend, destroyer of both Audi's rally dominance and Porsche's on-road air of superiority 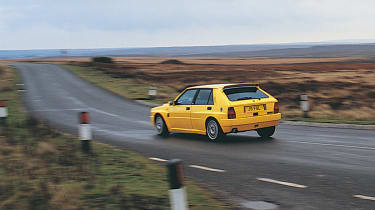 This is the car that buried the Audi Quattro, both in the World Rally Championship and on the road. Of all the hormonally-engineered mainstream metal lumped under the ‘affordable supercar’ heading, the Lancia was the most super of its generation.

Usual Modenese suspects apart, there aren’t many Italian cars that command more respect than the holy ’Grale. But the lumpy little Lancia was a hero to thousands, a genuine slayer of giants. Imagine it, a car that cost the same as a junior executive saloon that would run down a Porsche 911 on a demanding road.

Even by modern standards, it doesn’t seem to matter how extreme you get with a ’Grale Evo, how ludicrous the liberties you take on the edge of adhesion, it always seems to have a few tricks in reserve that will pull you through. Driving one is an education. Accelerate hard on the turn and it finds acceleration where lesser cars find wheelspin or a close encounter with the hedge on the other side of the road. There may be faster cars in a straight line, ones that can pull more lateral g on smooth, dry tarmac. But very few dispatch real roads and uncertain conditions with such confidence. The harder you drive the Lancia, the better it gets.