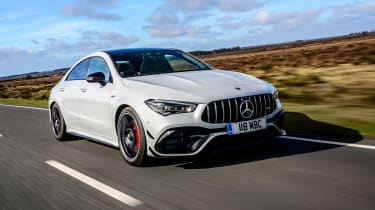 If you’ve had your eye on an Audi RS3 Saloon, then the new Mercedes-AMG CLA 45 is Affalterbach’s effort at tempting you away from the five-cylinder car, and into the most powerful 2-litre car currently on sale.

That alone will be a selling point for some, and along with the latest CLA’s sleek styling and a cabin like no other in the class, the latest CLA 45 is off to a far better start than its predecessor ever was. Can the CLA 45 succeed where the old car did not?

Under the bonnet the 45s get an entirely different unit from the CLA 35’s 2-litre, turned through 180 degrees in the engine bay putting the turbocharger and its plumbing at the back. AMG has applied much of the knowledge from its 4-litre V8 to its M139 four-pot, and boy does it show.

A host of upgrades, from roller bearings for the turbine, through extra cooling for the turbo and improved valves, injection, cooling and a baffled sump for the engine, allow the engine to deliver its new class-leading output.

Peak power is now 382bhp in CLA 45 trim (which won’t reach the UK) and 416bhp for the CLA 45 S, with maximum torque outputs of 354 and 369lb ft respectively. These figures are good for a 0-62mph time of as little as four seconds flat, and an electronically limited top speed of 168mph in the more potent S model. 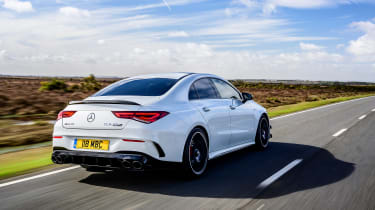 All-wheel-drive traction helps, particularly when the car is fitted with the new AMG Torque Control set-up at the rear differential, with a pair of multi-disc clutches to meter out torque to each wheel. The transmission is an eight-speed dual-clutch, which can be controlled via steering wheel-mounted paddles.

Engines are rarely a defining feature of modern hot hatchbacks, with everything homogenised to the same four-cylinder turbocharged norm and differentiated largely by throttle maps. The CLA 45’s is different though, bursting with character and delivering explosive performance from the first squeeze of the throttle to the final blat of the limiter.

There’s little lag to contend with, a feeling neatly visualised by the boost gauge on one of the dozens of on-screen menus, which rockets up to maximum with even gentle throttle inputs. Left in auto the eight-speed dual-clutch gearbox is intelligent enough (in Sport and Sport+ modes at least) to be in the most useful gear, most of the time, but click the button for manual changes and the CLA has searing, angry straight-line pace dictated entirely by your right foot, your fingertips and your sense of social responsibility. 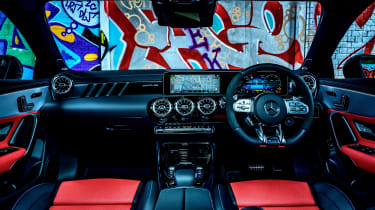 Aside from the engine improvements, the CLA 45 also gets comprehensive bracing throughout the chassis, cutting down on torsional twist. The front and rear subframes are also rigidly mounted, as is the rack for the variable-ratio steering. The CLA45’s dampers, like the A45’s, use both frequency-selective technology (which uses internal valving to allow pliancy over rough surfaces but simultaneously allows for good body control) and are adjustable via the car’s driving modes.

On UK roads the CLA 45 has the same composure it did on the smoother asphalt of the international launch. The adaptive dampers no doubt play their part, and while AMG has given us the option to separate their three stages from your chosen driving mode – so you can combine Sport+ with the softest dampers, for instance – its ability to deal with nastier surfaces doesn’t seem to diminish even in its firmest setting.

That lets you concentrate on the road ahead, and appreciate the car’s marvellous ability to decimate a road while engaging with its operator. The gradual separation of feedback from extreme speed is an increasing problem as performance cars get ever faster, but whoever set up these latest 45s has somehow woven real tactility into the car’s elevated abilities.

The steering is intuitive, the brakes firm and progressive, and the all-wheel drive setup behaves just as you’d want it to, driving from the rear the moment you lean back into the power through a corner. 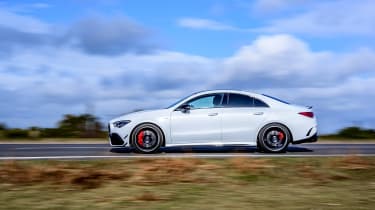 The nose follows steering inputs with a tenacious hold on the road and virtually no body roll. Lift more and the front end tucks, while lean on the power hard and early and the CLA just digs in, hooks up and swings you around the inside kerb like a water bucket on the end of a rope.

In isolation any differences wrought by the CLA’s wider track and extended bodywork compared to the A45 S are undetectable, but on the model’s launch overseas, driving the pair back to back did reveal a few differences, with just a little more momentum to the rear of the car. The difference was slight, but driving each in the same fashion, I found myself relaxing the steering more often in the CLA. When turning into and powering out of a given corner, the rear end will slide just a touch more than it will with the A45’s docked tail.

Overall, the CLA 45 is a far better effort than its predecessor; quicker, better to look at, more pleasant inside, and with a more adjustable and involving chassis. If there’s one downside, it’s price: The CLA 45 S starts at £52,145, and the full CLA 45 S 4Matic+ Plus tested here, with its aero kit, forged 19-inch wheels and other toys, is another six grand more than that.

The closest conceptual rival is Audi’s RS3 Saloon, which starts at £47,285 and has a glorious five-cylinder engine that’s even more theatrical than the AMG’s four-pot, but its chassis can’t match the CLA’s for driver involvement and as a result, delivers little in the way of fun below maximum attack.

In many ways, the CLA 45’s closest competition is the 302bhp, £39,970 CLA 35. More than just power separates the two, with the 45 being a more expressive car as well as a quicker one, but on normal roads with normal speed limits there’s realistically little difference between them in pace. Many of the CLA’s qualities – the styling, the interior, the capable chassis – are present and correct whichever model you choose. 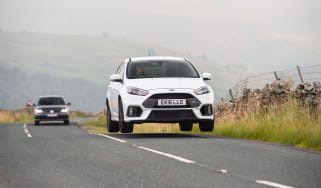