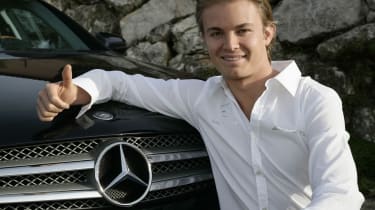 Nico Rosberg is the first driver to be announced as a Mercedes-Benz Motorsport racer. He arrives from Williams and is set to be the lead man at the new MBM team, which debuts in 2010 after the German manufacturer bought a controlling interest in Brawn GP, the 2009 Formula 1 constructors’ champion. Both of Brawn’s drivers have headed elsewhere, champion Jenson Button going to McLaren and Rubens Barrichello heading in the opposite direction to Rosberg, joining Williams, leaving team principal Ross Brawn to reshape things despite a massively successful 2009. Rosberg is a fine acquisition, with four seasons and 70 grands prix of F1 experience to his name and an F1 world champion for a father (Keke Rosberg) whose success MBM will be hoping Nico can emulate. Team Principal Ross Brawn - ‘We are delighted to welcome Nico Rosberg to our Mercedes team and are very much looking forward to working with him.  ‘I had the pleasure of working with his father Keke during his Formula 1 career and it is great to see Nico following in his footsteps.’ Nico said - ‘I am very proud that I will now drive for the new Mercedes team and work with Ross Brawn. I am more motivated than ever and can hardly wait to start testing with the new Silver Arrow and for the first race of the new season at Bahrain’. Keep your eyes on evo.co.uk as the 2010 Formula 1 grid thrashes out.