The moment the salesman opens the door on that first test drive, many people will be sold. The new A-class’s neat horizontal layout to the dashboard, wide instrument panel display and simplified centre console make everything else in the class seem staid and unimaginative.

Dig deeper and there are perhaps one or two too many different types of material on display and the traditional Mercedes steering column mounted gear selector (and its combined wipers and lights stalk on the other side) both looks and feels oddly cheap. Despite this, the layout and appearance remain appealing and the absence of bulky mouldings lends an airy feel, despite the gloomy black trim of the AMG Line cars we drove. A range of adjustment to the wheel and seats and well-placed pedals make for a comfortable driving position too.

Technologically it’s right on the button. At its flashiest the A-class cabin uses a pair of 10.25-inch displays, with the central display now touch-sensitive. That’s just one of the ways you can now control it, the others being a touchpad in the centre console, buttons and touch-sensitive pads on the steering wheel spokes, and voice commands as part of what Mercedes calls MBUX. 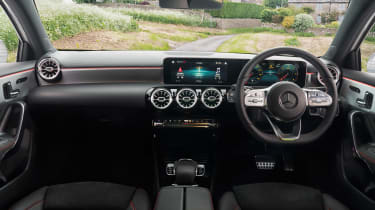 All methods work surprisingly well, and the voice control system is among the best we’ve tried. It’s still unfamiliar with some commands, but by and large it’s quite easy to set navigation destinations, change radio stations, adjust the interior temperature or just change the ambient lighting colour with simple spoken instructions. As a means of distraction-free control of infotainment, it’s better than any touchscreen.

The various displays are of course multi-configurable, and the touch-sensitive elements allow you to use smartphone-style pinching, swiping and scrolling movements, with simple “back” buttons present on all surfaces - a useful shortcut to whatever screen you were on before, so you don’t end up eight menus away from your navigation directions or other similarly irritating predicaments.

Once you’ve spent a good while prodding and swiping at the steering wheel buttons and the central touchscreen you’ll eventually settle on an instrument layout that suits you too - virtually every element of both screens can be configured to suit, or you can just select one of the themes Mercedes has already programmed in, from a sporty layout, to one themed around economical driving, to another that removes virtually all visual elements from the screen for distraction-free driving.

One really neat touch is the augmented reality sat-nav directions. Approach a junction or a roundabout and the map on the centre screen is replaced by the view from the front-facing camera, which is then overlayed with an arrow showing your route. It's a brilliantly simple and intuitive piece of kit.