The first two Meredes-Benz A-class iterations were clever and sold well, but the tall and narrow styling caused Mercedes some stability headaches at the first car’s launch. Like the Audi A2 it was a brilliantly packaged machine that aimed to combine the tradition Merc traits of space and quality, but in a package that was more VW Golf in its size and running costs. While it sold well, conventional rivals sold even better.

By the time the second-generation A-class had arrived, Audi and BMW’s own small cars - the A3 and the 3-series compact (and later 1-series) had nailed the balance of a premium feel and compact size that an increasing number of customers craved. leaving the intelligent but ungainly A-Class out of favour buyers now more concerned with image than intelligence.

If you can’t beat ‘em, join ‘em. The third-generation A-class ditched the sandwich floor and lofty seating position and went down the conventional two-box hatchback route. Sales went gangbusters (particularly in the UK, the world’s biggest A-class market) and diversification into saloons and estates (with the CLA line), mini-MPVs (B-class) and hot hatchbacks (the AMG A45) strengthened its position further.

With the fourth-generation A-class, more technologically advanced and sleekly styled than ever, Mercedes is hoping to replicate that feat. With sharper looks, a striking cabin, new engines and E-class levels of technology it works on paper, but it also has to impress on UK roads.

Early impressions suggest it’s a more appealing car in the showroom than it is on the road, with uninspiring handling and an unsettled ride chipping away at the car’s premium feel, but for cabin ambience and technology the new Mercedes A-class is hard to beat, and smaller wheels may yet fix our misgivings about the car’s road manners. And like the previous-gen car, further variants are already on the horizon: the B-class has just been launched, and an A-class saloon, plus a CLA and CLA Shooting Brake, are on the way.

Engine, gearbox and technical specs - A wide range of four-cylinder units, both petrol and diesel. Six-speed manual, and seven- and eight-speed autos are available depending on the model.

Performance and 0-60 time - In performance terms the A35 is a proper hot hatchback, even if it's not as wild as some. Lesser models have competitive performance but no unit truly shines, and the 1.3-litre petrol is disappointingly harsh.

Ride and handling - Handling is competent and grippy but uninspiring, while a poor ride harms refinement on most models. Smaller wheels may help improve matters. A35 is poised, grippy and decent fun, and actually one of the better-riding A-classes - or at least more acceptable due to its performance.

MPG and running costs - Just over 60mpg (on paper) from the A180d, with low rates of tax as a result. Real-world figures are less impressive but on a par with rivals.

Interior and tech - The new A-class’s stand-out feature. Slick cabin design makes rivals look old, bulky and clunky, and the in-car tech is among the best we’ve tried. The MBUX screens are minimally distracting and the voice control genuinely works.

Design - A refined version of the old car’s styling, with fewer uncomfortable lines, and neater details. An aero kit for the A35 bumps up the aggression. 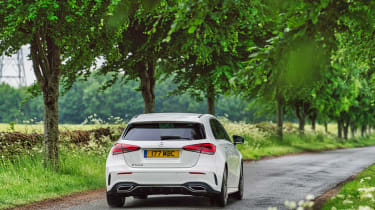 It might have a higher price than its predecessor, but with the entry level A180 SE coming in at just £22,195, it puts the A-class within reach of customers shopping for the likes of Ford’s Focus and the Vauxhall Astra.

To take full advantage of the tech on offer, you’ll want to spend a bit extra to equip the dual 10.25” screen infotainment system as opposed to the 7-inch units fitted as standard. This will set you back £1395 for the Executive pack, also adding active park assist and heated seats. The £2395 Premium pack offers the same upgraded infotainment screens alongside 64-colour ambient lighting, keyless go, an upgraded sound system and a few other toys too.