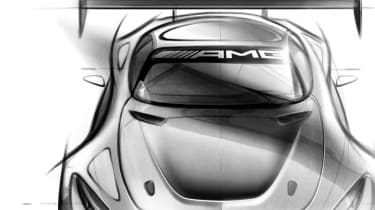 The GT3 racing class is one of the most exciting in modern racing, pitting cars as diverse as the Nissan GT-R that won the Bathurst 12 Hours against vehicles like the astounding McLaren 650S GT3 from evo Track Car of the year.

Mercedes is set to join that fray with a car based on the Mercedes-AMG GT road car. Due at the 2015 Geneva motor show, the car has been previewed in these official sketches.

Depicting front and rear angles of the aggressively-styled racer, the AMG GT3 features all the usual GT3 racing cues – wide arches, a multitude of scoops and vents punctuating the bodywork.

GT3 regulations are fairly open on body style and engine type, so the AMG’s engine and drivetrain layout are likely to remain similar to that of the road car.

Weight will be somewhere between the 1200-1300kg, a great deal lighter than the 1570kg road-going AMG GT S, and power output will be capped between 500-600bhp to ensure a competitive power to weight ratio. The GT S road car produces 503bhp.

The car will replace Mercedes’ previous (and hugely successful) GT3 challenger, based on the SLS AMG.

While the race car will be launched in Geneva, it’s likely elements of the GT3 racer will find their way into a higher-performance, Black Series-style version of the road car. 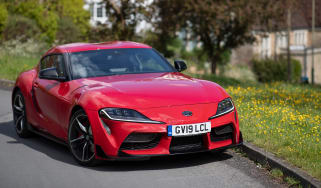 The BMW 5-series is about to get a fresh look, without bigger kidneys
Visit/bugatti/202400/bugatti-chiron-veyron-and-eb110-gather-for-a-photoshoot-of-dreams

Celebrating the last three decades of operations, Bugatti gathered all three of its flagship hypercars in Dubai
Visit/used-cars/19675/used-car-deals-of-the-week