High-tech E-class can now be had with extra practicality - and performance, in the E 43 model 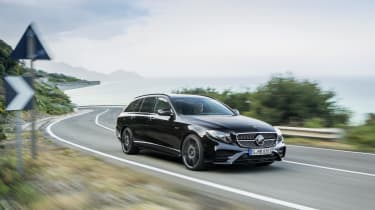 Fifty years after the debut of the very first Mercedes-Benz estates, based on the 200D and 230S ‘fintail’ models, the company has pulled the covers off the new E-class Estate and its performance variant, in the shape of the Mercedes-AMG E 43 4Matic.

Both models will pair the S-class-style luxury and tech we’ve seen in the recently-introduced E-class with the kind of interior volume to make you think twice about a crossover or SUV.

Topping the range (until an E 63 model arrives) is the E 43 4Matic, using the same 3-litre twin-turbocharged V6 as other ‘43’ models across the Mercedes-Benz range. 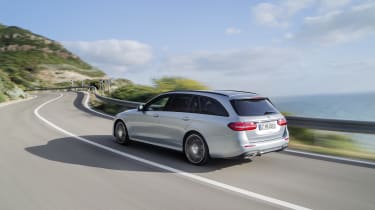 AMG models also get sports suspension unique to the model and appropriate AMG styling tweaks to differentiate them from cooking models, though with a beefier E 63 model in the pipeline the E 43 treads a subtler path than full-fat AMG models. All Estates get integrated roof rails, while Exclusive trim models get a classic-style Mercedes radiator grille - other lines put the three-pointed star front and centre.

Elsewhere in the range Mercedes will offer two diesels - a four-cylinder 220d and an E 350d with a 3-litre V6 turbodiesel engine. For the time being, there are no plans for the entry-level 200d model, nor the E 200, E 250 and E 400 petrol versions, to be offered in the UK market.

Space will be another draw to the E-class estate. Seats up, the load capacity is 670 litres, while dropping the rear row expands this to 1820 litres. Cabin design is as-per the saloon, with an S-class-style dashboard, the centrepiece of which is a pair of 12.3-inch widescreen digital displays.

Trim options include open-pore wood and ‘wood in a yachting look’, with liberal use of leather in several colour lines. Notable equipment packages include the Heat Comfort package which includes heated armrests and the ability to warm your posterior more rapidly on cold mornings. Entertainment packages for the rear seat row should also keep your kids blissfully quiet for a few moments. 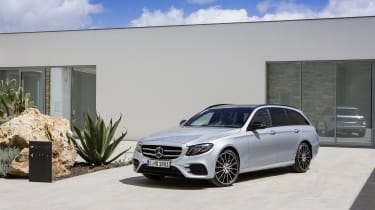 Mercedes-Benz has also announced the introduction of its new 'Concierge Service' with the E-class, which is among the most advanced such services on the market right now.

As part of the firm's 'Mercedes and Me' initiative and standard with the Comand Online package - which comes with mobile onboard internet - the Concierge Service is as comprehensive as its name implies. Drivers can press a button in the car to call their concierge, who can then organise everything from hotel room bookings to buying tickets for sporting events, before sending details of all appointments to your satellite navigation.

A year's subscription to Concierge is free (though to enjoy all its functions you'll have to give the service your credit card details for making payments) with a fee thereafter.

UK pricing is to be announced this July, with deliveries beginning in October. Expect Estate models to cost around £2000 more than the equivalent saloon (think approximately £36,000 for an E 220d SE) with equipment and trim levels broadly matching that of the four-door.