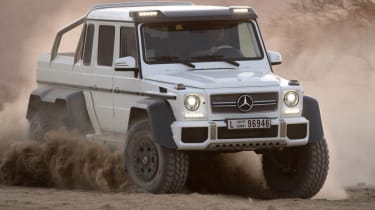 If you thought that the Mercedes-Benz G-wagen couldn’t get any more butch then you were wrong. Mercedes has announced that it will build limited numbers of the mad six-wheeled G63 AMG 6x6. The 6x6 is set to cost a whopping three times more than the standard, £123,140 G63 AMG. This means that when the car goes on sale in October it will carry a price tag of around £350,000, second only in the Merc range to the new SLS Electric Drive supercar. The military version of the 6x6 makes do with a 3-litre diesel engine, but the plusher civilian version gets AMG’s twin-turbocharged 5.5-litre V8, which produces 536bhp and 560lb ft – very handy since the G63 6x6 tips the scales at a pretty hefty 3775kg. Power is transferred via a seven-speed automatic gearbox, and is nominally split 30:40:30 between the three axles. A hot hatch-rivaling 0-62mph of under 6sec is quoted, while there’s a limited top speed of 100mph – on whatever surface you choose to use it on… Mercedes says that the 6x6 is likely to return around 15mpg, which would pose a slight problem if crossing a desert, so two fuel tanks totaling a 159-litre capacity are provided. Since the car is designed to be used in the toughest off-road conditions, Mercedes has increased the standard G-wagen’s ground clearance to an impressive 460mm and fitted huge, 37in wheels. The 6x6 also has a longer wheelbase and wider track than the standard car, helping to accommodate the extra axle, drive shaft and differentials. A limited run of around 20-30 Mercedes G63 AMG 6x6s is planned each year.