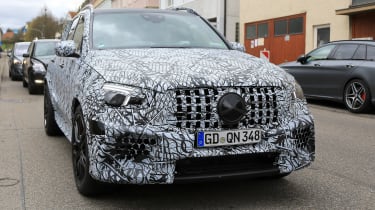 Uncowed by the swathes of new performance SUV models either on the market or in the pipeline, Mercedes-AMG is gearing up to launch its latest GLE 63 to show the new kids a thing or two about big, powerful 4x4s. Spied in testing here, the GLE 63 will be based on Mercedes’ all-new GLE SUV which should be revealed later in 2018. It will replace the current model, which first appeared in 2011 under the old M-class nomenclature.

AMG’s impressive recent form should bode well for the next GLE 63. We can confidently expect the adoption of the brand’s increasingly ubiquitous M177 4-litre twin-turbo V8 engine, mated to a nine-speed automatic transmission and 4Matic all-wheel drive.

> Click here for the latest on the AMG GT 4-door

Although Mercedes-AMG is remaining tight-lipped about power outputs, we imagine this model will mirror the larger E 63 and E 63S in terms of brute force (563bhp and 603bhp respectively), meaning that Maserati’s 581bhp Levante Trofeo top trump in the performance SUV class might soon be in jeopardy.

Visually, the next GLE is expected to adopt Mercedes’ new design language, banishing complex, aggressive lines for a softer look. Lighting units will also fall closer in line with those of the E-class as part of Mercedes’ alignment of its SUV models to their saloon and estate counterparts. Core GLE design elements, such as the blacked-out D-pillar and swept back C-pillar, should remain, although we do expect a totally new interior to feature, mimicking the dual-screen architecture of other recent Mercedes models.

Any lost visual aggression will be liberally reapplied on this AMG version though, with telltale signs of a ‘Panamerica’ grille and large wheels sitting within widened arches on the prototype pictured. Squared-off quad exhausts in the rear bumper point towards the model in these images being the flagship ‘63’ version, although we expect a halfway-house GLE 53 model incorporating a turbocharged straight-six engine to be available too.

We should get our first look at the new GLE later this year, with this AMG model not too far behind. But aside from its new-age rivals like the Jaguar F-Pace SVR and Maserati Levante Trofeo, the GLE 63 will also soon have to deal with an all-new X5 M and Audi’s upcoming Q8 RS flagship SUV to have any hope of rising to the top of the premium performance SUV class.